Celebration Food we have had recently 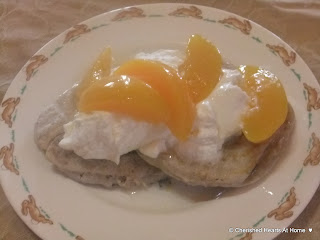 This post is about some celebration food we ha have had over the last couple of weeks.
One of the things we changed for Rogan's birthday was to eliminate the party bags and replace with some  other special 'party food'.
Frankly I am not convinced we achieved much with this as we had a small amount of lollies and the younger children especially responded to the sugar in them as well as the sugar in Rogan's bought packet mix, even though it was gluten free.
It also took a lot of time to prepare this extra party food and so the time spent on birthday  preparation for this took away from the birthday time doing other things.
So we may just consider putting the party bags back on the menu, perhaps with a selection of the birthday child's favourites and simply deal with he aftermath as a special occasion deal

For breakfast we had pancakes using this  packet mix - Orgran Buckwheat Pancake Mix. We really are enjoying this mix and it does not contain wheat but does  contain rice flour. 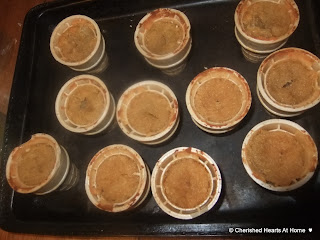 These are the start of Ice cream cup cakes from Elana's Gluten Free Cupcake Book,, we borrowed this from the library.. These weren't a huge favourite as the cake was cooked inside the ice cream cones (gluten free if you can)  on a low heat and they just didn't seem to cook properly. To finish them we put chocolate cream on top: melted chocolate mixed in with whipped cream. (image below) 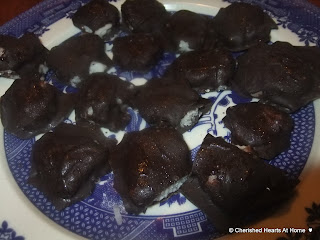 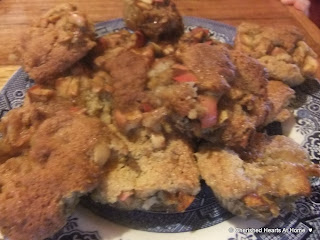 Method~
Preheat oven to 300 degrees.
Line a muffin tin with 10 baking cups.
In a small bowl, mix almond flour, baking soda, cinnamon and salt.
In a large bowl, whisk together eggs, honey, coconut oil and vanilla until well blended.
Add dry ingredients to wet and whisk until well combined. In another small bowl, mix together the apple crisp topping.
Add one spoonful of batter to prepared muffins cups.
Lift muffin pan with both hands and evenly tap bottom of the pan on the counter to flatten batter.
Then add a spoonful of the apple crisp mixture.
Top with another spoonful of batter, tap pan to flatten batter.
Top with remaining apple crisp mixture.
Bake 25-28 minutes, until muffins are slightly brown and an inserted knife comes out clean.
Allow to cool in muffin pan. This is the birthday goodies plate we had. We added a few  lollies of choice to the mix as well. 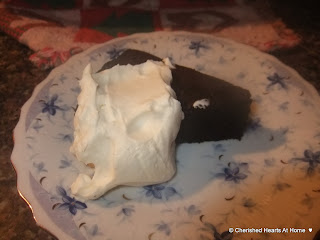 On the 30th of April we had the Feast Day of St Catherine of Siena who  is Autumn and Vellvin's Confirmation saints. We made this very nice Chocolate Mousse Cake with no flour of any kind . I got it from here. This is my favourite chocolate cake. It is very 'fudgy' and muddy and I love that it has no flour of any kind.
Ingredients
Method of Preparation
Preheat the oven to 350 degrees and grease a 9 inch round pan. In a double boiler (you may also use a glass or metal bowl that fits snugly over a pan of simmering water) melt the butter and stir in the cocoa powder. Let cool slightly, about 10 minutes. In a large bowl, whisk 2 of the eggs and the additional 4 eggs yolks (reserving the whites!) until well combined. Stir into the eggs only 1/3 cup of the sugar, the chocolate mixture (if it’s to warm it will begin to cook the eggs! As a precaution always stir while pouring in the warm mixture), Kahlua, vanilla, and a small pinch of salt. Blend until combined. In a mixer with balloon whisk attachment (can be done by hand as well) beat the 4 remaining egg whites with the cream of tartar until stiff peaks form. While beating, gradually add in the remaining 1/3 cup sugar.
Once combined turn off.

Stir a large spoonful of the beaten egg into the chocolate mixture to help lighten it for ease in folding the rest of the whites in. Once the spoonful has been incorporated, gently fold in the remaining egg whites. Pour into the pan and bake for about 35 minutes, or until the top cracks.

Now, even as wonderfully fluffy as it looks, the nature of this cake is to fall. Cool for a few hours before serving to allow it to rest as needed. Slice and serve!
Whipped cream is a fantastic accompainment to this! 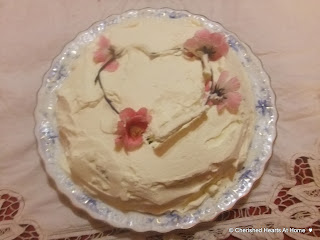 As part of our wedding anniversary the children made the cake below and put cream on top along with a flower heart wreath. This is one of the most  successul cakes we have as well 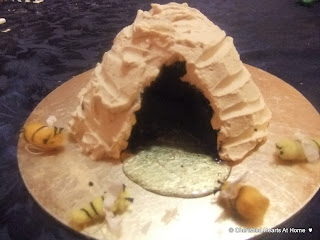 Rogan's Birthday beehive cake was a packet mix  Deliciously Free Moist Chocolate Mud Cake this has sugar in it though so not as good as we would have liked.
Once again our 'icing' of choice is whipped cream ( we have always used this instead of an icing mixture so the change to sugar free frosting has only been slight for us)
For this one to get the colour I added a small amount of dissolved coffee and a little bit of honey.

And for more celebrations I will be  sharing our special wedding anniversary meal and Rogan's Zoo party soon!

We're relaxed on special occasions, too. We have a cake and, maybe, some ice-cream. We haven't tried gluten-free but we seem to have persevered with giving up sugar and fructose foods like honey. It wasn't as hard as I expected because we didn't change our savoury diet very much.

I let the children have a little chocolate, every now and then, but they find it very sweet, these days. I was the only one who gave up sugar completely. We did it mainly to protect their teeth and that's taken a big worry off my mind.

Thank you for sharing your recipes. It's very inspiring to see all your ideas.

Dear Vicky,
thank you for your input. I must say chocolate really is our 'junk food of choice' we really all still love it, but have it rarely and I notice it does cause silliness especially in my older children.

Can't say what we will do with the honey, we mostly use it in a cake if we make one :)
Blessings
Gae

I can't wait to try some of these! Such yummy recipes! Thank you for sharing! I've been thinking about you and hope you are doing great! Miss hearing from you ~