What a very Happy Birthday it was for our 3 year old on Monday. He had a wonderful day full of presents, toys, party bags and games,Easter chocolate and Pirate themed party items.
As I managed to put the photos in wrong I'll start from the night time blowing out of the cake. 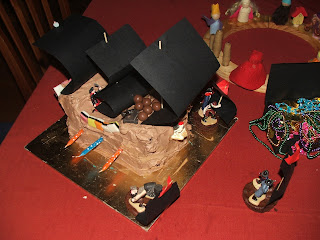 This was the Pirate cake which had been coverted since I saw it here some time ago. I have made 3 pirate cakes before but this was completely different. Of course the ship had to have black sails as we are big time fans of "The Black Pearl" from Pirates of the Carribean. Saxon, Vellvin, Rogan and Moran made the cupcake dingy's as their present to him.
Each of the children make home made cards to give the Birthday child and most of them make presents too. 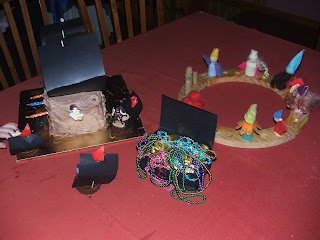 This is the birthday cake with dingy's, pirate treasure box(home made) filled with treasure of jewels and chocolate coins.
The Birthday ring has been on the table all day.
As we find postage costs a lot to buy these type of things form the USA Braedon made the ring for me. He usually ends up making me lots of wooden things instead of us buying them.I am hoping to do a special post to show you some of the things he has made, I think he is amazingly talented but I am very biased. I made the figures for the ring and had hoped to make a pirate one especially for this birthday but didn't get time.
We also made the bees wax candles on Candlemas and the children made me some for Christmas as well. These ones have been dipped but I prefer the rolled ones, for uniformity of shape. 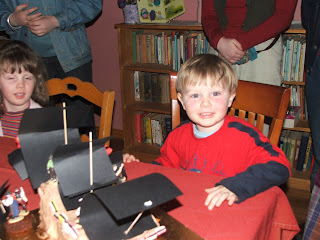 The birthday boy with his cake ready to blow out the candles. 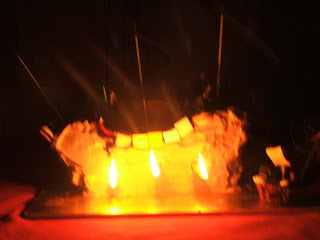 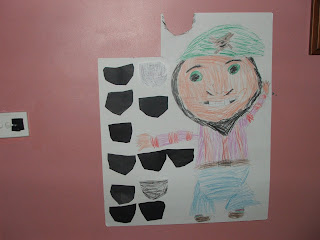 Rogan drew this pirate and made the patches for "pin the patch on the pirate". I think his pirate is so sweet. Love those bell bottom pants. 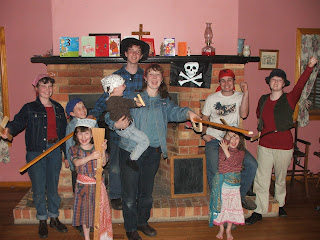 Here are some of our pirate crew with flag and parrot. 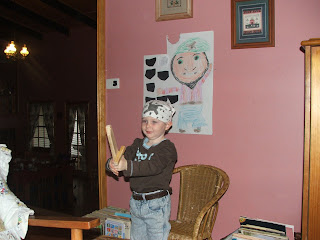 The pirate is ready for action with the sword and pirate bandana made as part of his present from Autumn and Rogan. 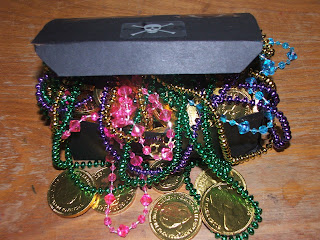 Pirate Treasure. The box was made by Eden. 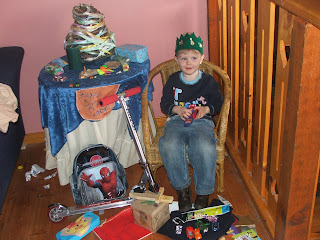 After all the presents have been opened. 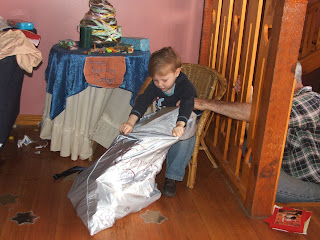 Retreiving presents from the Birthday bag. Each person has a bag I made for them that we put the presents in the night before. Each bag is a different colour with different decorations on the front.
It was funny to see him opening the presents as he would not leave the birthday chair so he was stretching as far forward as he could without getting up. 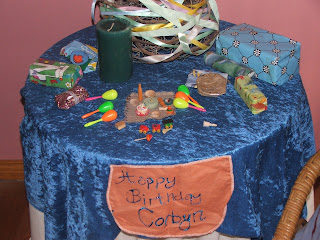 The seasons table with the birthday decorations on it and name of the birthday person. We have had to re wrap the decorative presents over the years as the little ones keep thinking they are real and unwrap them. 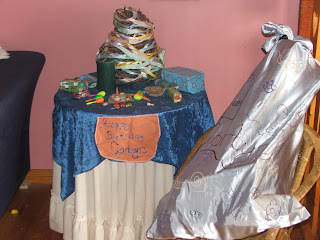 Everythings ready, where is the Birthday Boy? 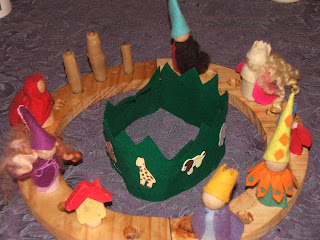 Close up of the Birthday Ring and figures.
Each child gets a new birthday crown each year. This one has animals on it. I did ask the children if they wanted a more eleborate one that we reuse every year but they like getting a new one each year.
That's what happens when you start a tradition without thinking it through. But I do enjoy trying to think up different themes to decorate the crown with each year that reflects the birthday child at that particular time. 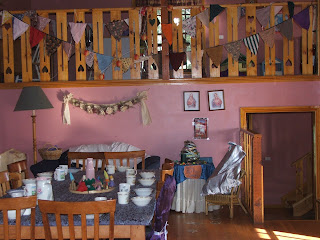 A shot of the room ready for the big day. It also shows the birthday banners hung over the bannister railing (along with the Autumn lights we didn't take down) and the throne for the Birthday Child. This I also made years ago and need to replace as it is starting to show signs of wear. It just slips over the chair and ties of with a ribbon. This one is purple organsa I would like to make a new one in Gold.
So, the table is all set, the presents are ready ---- LETS PARTY.

I was wondering something about your credit system. I'm trying to impliment it here and wondered how you deal with those who wish to watch others' computer games.
Thanks and Happy B-day to your pirate!

I don't allow watching as this increases computer time for all. But if two people want to share the one hour time slot they can put 50 credits in each and play together for one hour. But only if they have agreed on a game before hand. We also have very few computer games and our computer dosen't play the newest version ones.
This is a hard one and I do have to watch it or the little ones just watch the big ones and I don't give under 8's any computer time, and our 8 nearly 9 year old has very, very limited time. I find they tend to save their credits and often if they want to spend they will 'buy" DVD time.
DVD time anyone can watch but the 'buyer' gets to choose.