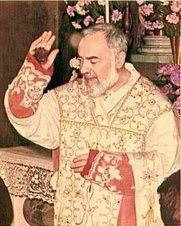 Some of our children have developed a strong devotion to Padre Pio so I have put this together for their benefit. Hopefully we will get to do some of the lovely colouring pages and have some Cappuchino flavoured drinks and Mousse.

Other than that I think we will just read about his life and try to reflect upon the many gifts and blessings he had and how we can best serve God as he did.

I pray you all have a wonderful day reflecting upon the life of this great Saint of whom we can all try to emulate in his love and devotion to his and our Lord.

Collect: God our Father, in Saint Pio you gave a light to your faithful people. You made him a pastor of the Church to feed your sheep with his word and to teach them by his example. Help us by his prayers to keep the faith he taught and follow the way of life he showed us. Grant this through our Lord Jesus Christ, your Son, who lives and reigns with you and the Holy Spirit, one God, for ever and ever. Amen.

Padre Pio was born in 1887 in the small Italian village of Pietrelcina. He joined the Capuchin Friars at the age of sixteen and was ordained a priest seven years later. For fifty years at the monastery of San Giovanni Rotundo he was a much sought after spiritual advisor, confessor, and intercessor whose life was devoted to the Eucharist and prayer. Yet despite such notoriety, he would often say, "I only want to be a poor friar who prays.

Padre Pio was born in 1887 in the small Italian village of Pietrelcina. He joined the Capuchin Friars at the age of sixteen and was ordained a priest seven years later. For fifty years at the monastery of San Giovanni Rotundo he was a much sought after spiritual advisor, confessor, and intercessor whose life was devoted to the Eucharist and prayer. Yet despite such notoriety, he would often say, "I only want to be a poor friar who prays."

Born to a southern Italian farm family, the son of Grazio, a shepherd. At age 15 he entered the novitiate of the Capuchin Friars in Morcone, and joined the order at age 19. He suffered several health problems, and at one point his family thought he had tuberculosis. He was ordained at age 22 on 10 August 1910.

While praying before a cross on September 20, 1918, Padre Pio received the stigmata. He is the first priest ever to be so blessed. As word spread, especially after American soldiers brought home stories of Padre Pio following WWII, the priest himself became a point of pilgrimage for both the pious and the curious. He would hear confessions by the hour, reportedly able to read the consciences of those who held back. He was reportedly able to bi-locate, levitate, and heal by touch.

Today there are over 400,000 members worldwide in prayer groups began by Padre Pio in the 1920's.

His canonization miracle involved the cure of Matteo Pio Colella, age 7, the son of a doctor who works in the House for Relief of Suffering, the hospital in San Giovanni Rotondo. On the night of June 20, 2000, Matteo was admitted to the intensive care unit of the hospital with meningitis. By morning doctors had lost hope for him as nine of the boy's internal organs had ceased to give signs of life. That night, during a prayer vigil attended by Matteo's mother and some Capuchin friars of Padre Pio's monastery, the child's condition improved suddenly. When he awoke from the coma, Matteo said that he had seen an elderly man with a white beard and a long, brown habit, who said to him: "Don't worry, you will soon be cured." The miracle was approved by the Congregation and Pope John Paul II on 20 December 2001.

* St. Pio is a saint of the last century, so there are many pictures and biographies to read more about his life. Having this gift of the stigmata was very hard on his life — both physically and emotionally. Find out more about the stigmata and his other mystical gifts, such as bilocation. St. Pio also had great devotion to his guardian angel. 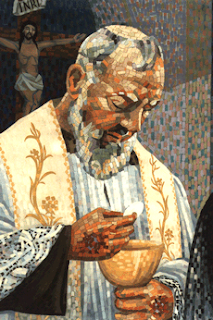 Mystic, Confessor, Stigmatic
For 50 years he suffered the five
wounds of the crucifixion.

A true victim with Christ.
A credible sign to our time.
A channel of grace.
His Sanctity attracted souls
and moved them toward Christ.
His Spiritual Family is open
to all -- "They will know and
I will know," he said to me."

May the Church honor him
for his sanctity and wisdom --
and officially grant us a
New Saint:

An Introduction to Padre Pio
About Padre Pio here 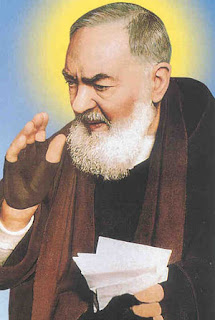 Padre Pio was born Francesco Forgione on May 25, 1887, in Pietrelcina, Italy, into a simple peasant family. At the age of 15 he entered the Capuchin Franciscan Friars, and was ordained a priest in 1910. In September 1916 he was assigned to the Friary in San Giovanni Rotondo in central italy, where he lived for the rest of his life.

After celebrating morning Mass on September 20, 1918, during his prayers of thanksgiving before the Crucifix, Padre Pio received the "Stigmata". His hands, feet and side were pierced with the nail marks and the lance wound of the Crucified Christ. Doctors estimated that for the next 50 years he lost a cup of blood every day. His five wounds were deep, bleeding and painful, but completley free of inflammation and swelling.

News of his holiness spread rapidly. Millions of people attended his Masses. He received letters from believers all over the world who asked for his saintly counsel in their times of distress and mjisfortune. Countless were attracted to his confessional, where he celebrated the Sacrament of Penance for as many as 16 hours a day. People waited as much as two weeks to have him hear their confession, for they perceived in Padre Pio the true heart and soul of the Gospels, expressed in a simple and uncomplicated manner. His whole life was marked by long hours of prayer, continual sacrifice, and strict austerity. He had a very deep union with God, a burning love for the Holy Eucharist, and a fervent devotion to Our Blessed Mother.

Worn out by half a century of intense suffering and constant apostolic activity in San Giovanni Rotondo, Padre Pio was called to his heavenly reward on September 23, 1968. He was canonized a Saint by Pope John Paul II on June 16, 2002. Today his tomb is the most visited shrine in Europe, surpassing even Fatima and Lourdes — a place of extraordinary holiness for those in search of inspiration.

Gracious God, You generously blessed Your servant, Padre Pio, with the gifts of the Spirit. You marked his body with the five wounds of Christ Crucified, as a powerful witness to the saving Passion and Death of Your Son, and as a stirring inspiration to many people of Your infinite mercy, forgiveness and love.

In the confessional, Padre Pio labored endlessly for the salvation of souls. Through his prayerful intercession, many who suffered were healed of sickness and disease. Endowed with the gift of discernment, he could read people's hearts. From the blood of his wounds came a perfumed fragrance, a special sign of Your Holy Presence. With dignity and intense devotion, he celebrated daily Mass, inviting countless men and women to a greater union with Jesus Christ, in the Sacrament of the Holy Eucharist.

Through the intercession of Saint Pio, I confidently beseech You to grant me the grace of (here state your petition). Help me to imitate his example of prayerful holiness and compassion, so that I, too, may faithfully follow the Risen Lord, and one day rejoice in the Kingdom, where You live and reign forever and ever. Amen.