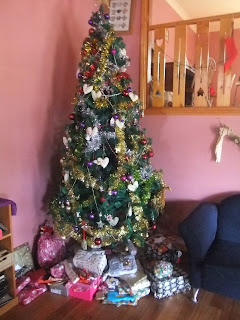 Christmas morning came around bright and early this year. Oh, that's right we were still up at 5:30am!!
Well due to this fact our family tends to celebrate a little differently on Christmas morning.
We have a 'do not wake Mum and Dad before........ this year it was 9am but our very obliging children waited until 10 am before coming in to wake us up (officially that is, as I had heard them up way before then).

We also do not go into the lounge room to look in the bags until everyone is assembled, with coffee in hand for  mummy, and the little music box is played.

We then open each persons Christmas bag one at a time to give everyone an opportunity to show and share with the rest of the family what they have been gifted. This of course means that it takes quite some time to go through every one and I admit some of the little people get a little grumpy and frustrated with the whole process. However I think it shows courtesy and love to give everyone a turn to enjoy the gifts together. 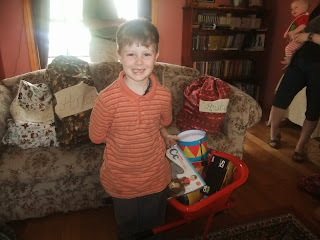 Corbyn was the first to start and may I say he actually started without waiting for everyone as his bag was in his wheel barrow and so I think he thought that meant he could start as it was already started. Does that make sense? 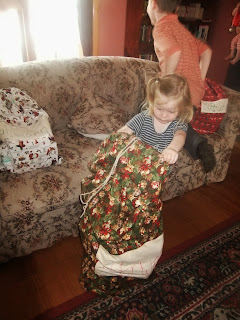 Arwen was next as we did try to go up from the youngest then. She was so excited as she was finally old enough to understand the concept of  opening Christmas presents. 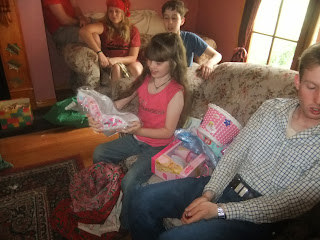 Myffwyn next and she enjoyed getting out her presents and showing them off. 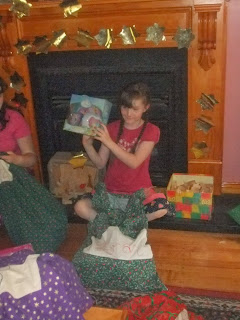 This year both Moran and Myffwyn got the same things so she kind of worked it out after the first couple of gifts. 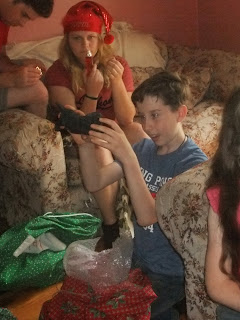 Rogan was so excited to get the little black dog as well as the art supplies he had so desperately wanted. 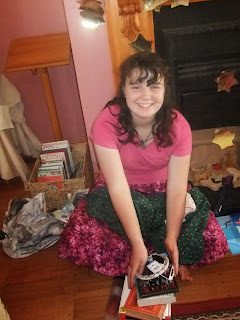 Vellvin was most excited about her Thor DVD - everything else was good but she was thrilled to get her most  wanted gift. 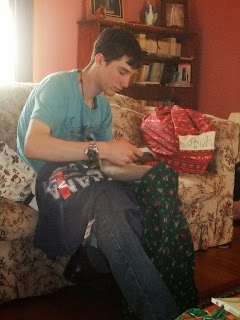 Saxon was so easy to buy gifts for this year, he has some quirky ways that I was able to indulge in this year. 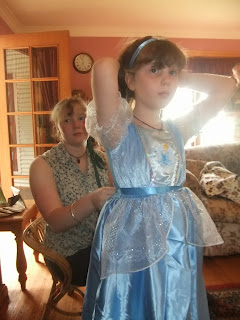 Our younger three girls are keen dress up fans and they LOVE Disney princesses, so this year we indulged and bought dress ups for them. 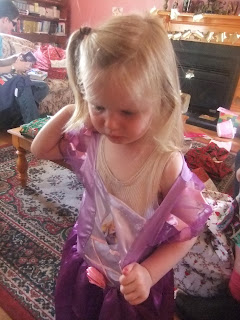 We all loved Arwen's Rapunzel outfit but she was not so keen on the day.....it becomes more liked as they all dress up together. 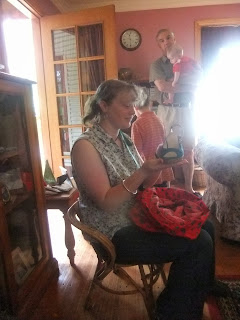 Eden has wanted some wedge shoes for soooooooo long and so these were so appreciated, along with her other gifts. 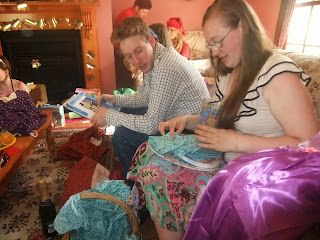 Anna-Lisa was her for Christmas with us and I loved getting her a Picnic Basket and making her table cloth and napkins to go with the other eating utensils I found to fill it with. 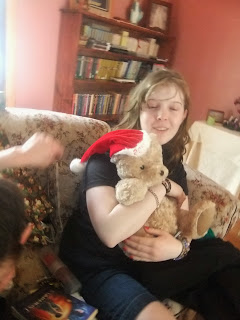 Autumn had been telling me for weeks that she wanted this plush bear as her most  'bestest' gift. She has been rarely out of his company since! 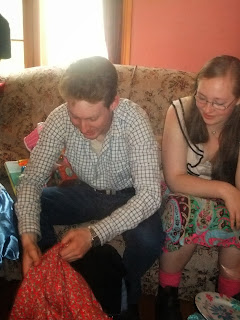 Older boys are so hard. However it is so easy to spend their allotted amount easily. Braedon needed some new good clothes to add to his wardrobe. 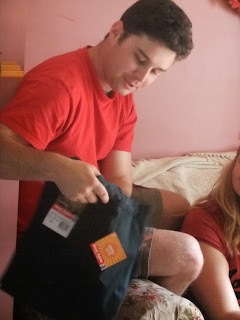 Kynan also need clothes for his work placement part of his Uni studies and so that was what he was gifted with. 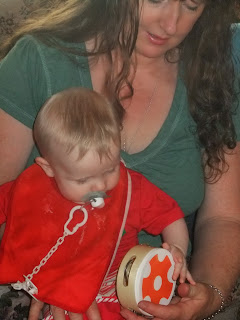 Trahaearn is quite difficult too as he has so many things we have passed down to him and have been made for him, as we just can't resist. So a few sensory toys were on the list for him and he has played with them so much already. 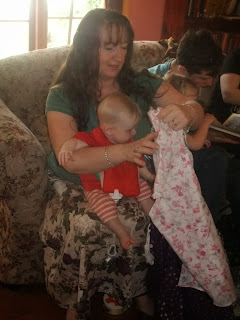 This year my dear husband actually asked me for a list to go shopping with. This meant I did not have to buy my own gifts. So Eden went with him and I was very pleased with my special gifts. 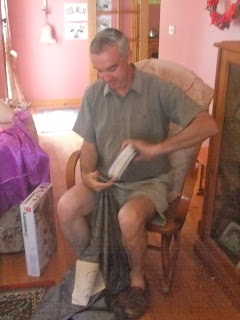 Stephen is hard as well. He never really wants anything but he does complain about the lack of music he likes being played so I bought him some new Cd's and Christian books for him as well as a game for the family to play. 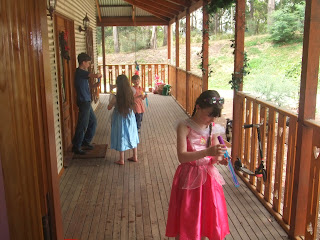 Playing with the bubbles and  dress ups on Christmas day. 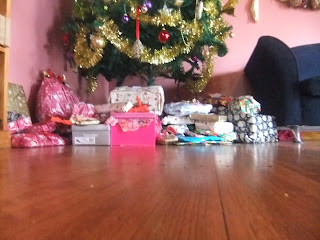 After we had opened all the Christmas bags we then went to the Christmas tree where we place all our home made gifts to each other. This year we had even more as both Kynan and Braedon along with their special girls had bought gifts for all.
This took so very long to get through as well, so we had not only tired adults but little ones too. 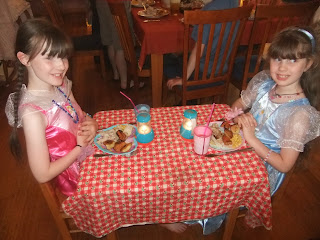 Our Christmas lunch, afternoon tea, was started by those very early risers who put our vegetables on to start cooking while we opened the gifts.
Thank you so much children!!!! 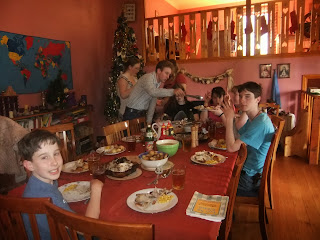 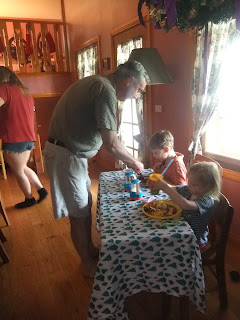 With our extra guests we had the little children on these little tables to make for more room.

After all the gift exchanging and lunch it is on to a very relaxing  afternoon with naps and eating and playing with gifts.

Once again we had a very family orientated celebration as we welcomed into our hearts and home the birth of Jesus.

Merry Christmas, Gae! Looks like you all had a wonderful family celebration. I love that you make everyone take turns to open. We do that too...but only have 3 children so not quite as difficult of a wait. :) I hate celebrating Christmas at my in-laws...it's a giant free for all...wrapping paper's a flying...bows are mid-air...and one has no idea who gave who what! Exasperating.

Oh Gae...what a joyful time everyone had :)

Looks like a lot of fun! I cannot believe that you slept(sort of) till 10 am! Lucky you!