May - Month of The Blessed Virgin Mary 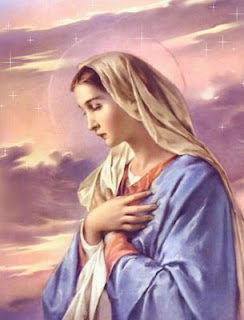 I am continuing with my summary of the significance of each month in our Liturgical Year
This month of May is dedicated to...... The Blessed Virgin Mary.

All but the last 4 days of the month fall within the liturgical season of Easter, which is represented by the liturgical color white — the color of light, a symbol of joy, purity and innocence (absolute or restored). The last four days of the month (beginning the Monday after Pentecost) are in Ordinary Time which is represented by the liturgical color green. This symbol of hope is the color of the sprouting seed and arouses in the faithful the hope of reaping the eternal harvest of heaven, especially the hope of a glorious resurrection.


The world is resplendent with Spring's increased light and new growth (well in the northern hemisphere). It is Mary’s month in the Easter season and all of nature rejoices with the Queen of heaven at the Resurrection of the Son she was worthy to bear. During the remainder of Easter time, let us endeavor through the prayers of the Holy Liturgy and the Holy Rosary to deepen our gratitude for the mystery of our Baptismal rebirth in Christ.

"The month of May, with its profusion of blooms was adopted by the Church in the eighteenth century as a celebration of the flowering of Mary's maidenly spirituality…With its origins in Isaiah's prophecy of the Virgin birth of the Messiah under the figure of the Blossoming Rod or Root of Jesse, the flower symbolism of Mary was extended by the Church Fathers, and in the liturgy, by applying to her the flower figures of the Sapiential Books-Canticles, Wisdom, Proverbs and Sirach.

"In the medieval period, the rose was adopted as the flower symbol of the Virgin Birth, as expressed in Dante's phrase, 'The Rose wherein the Divine Word was made flesh,' and depicted in the central rose windows of the great gothic cathedrals-from which came the Christmas carol, 'Lo, How a Rose 'ere Blooming.' Also, in the medieval period, when monasteries were the centers of horticultural and agricultural knowledge, and with the spread of the Fransiscan love of nature, the actual flowers themselves, of the fields, waysides and gardens, came to be seen as symbols of Mary…" – John S. Stokes

This  "month which the piety of the faithful has especially dedicated to Our Blessed Lady," and it is the occasion for a "moving tribute of faith and love which Catholics in every part of the world [pay] to the Queen of Heaven. During this month Christians, both in church and in the privacy of the home, offer up to Mary from their hearts an especially fervent and loving homage of prayer and veneration. In this month, too, the benefits of God's mercy come down to us from her throne in greater abundance" (Paul VI: Encyclical on the Month of May, no. 1).

This Christian custom of dedicating the month of May to the Blessed Virgin arose at the end of the 13th century. In this way, the Church was able to Christianize the secular feasts which were wont to take place at that time. In the 16th century, books appeared and fostered this devotion.

The practice became especially popular among the members of the Jesuit Order — by 1700 it took hold among their students at the Roman College and a bit later it was publicly practiced in the Gesu Church in Rome. From there it spread to the whole Church.


In our observance of the Marian month we should take into account the season of the Liturgical Year which largely corresponds with the fifty days of Easter. Our pious exercises could emphasize Our Lady's participation in the Paschal mystery and in Pentecost with which the Church begins. The pious exercises connected with the month of May can easily highlight the earthly role played by the glorified Queen of Heaven, here and now, in the celebration of the Sacraments of Baptism, Confirmation and Holy Eucharist.

The following practices which are recommended by the Magisterium are offered as suggestions for honoring Our Lady during Her month.

♥ The Regina Coeli
The ecclesial community addresses this antiphon to Mary for the Resurrection of her Son. It adverts to, and depends on, the invitation to joy addressed by Gabriel to the Lord's humble servant who was called to become the Mother of the saving Messiah.

♥ The Rosary
Also called the Psalter of the Blessed Virgin Mary, the Rosary is one of the most excellent prayers to the Mother of God. Thus, "the Roman Pontiffs have repeatedly exhorted the faithful to the frequent recitation of this biblically inspired prayer which is centered on contemplation of the salvific events of Christ's life, and their close association with the Virgin Mother."

♥ Litanies of the Blessed Virgin Mary
These consist of a long series of invocations to Our Lady, which follow in a uniform rhythm, thereby creating a stream of prayer characterized by insistent praise and supplication.

♥ Consecration and Entrustment to Mary
The Roman Pontiffs have frequently expressed appreciation for the pious practice of "consecration to the Blessed Virgin Mary" and the formulas publicly used by them are well known.

Louis Grignon de Montfort is one of the great masters of the spirituality underlying the act of "consecration to Mary". He "proposed to the faithful consecration to Jesus through Mary, as an effective way of living out their baptismal commitment."

♥ The Brown Scapular and other Scapulars
The scapular is an external sign of the filial relationship established between the Blessed Virgin Mary, Mother and Queen of Mount Carmel, and the faithful who entrust themselves totally to her protection, who have recourse to her maternal intercession, who are mindful of the primacy of the spiritual life and the need for prayer.

♥ Medals
These are witnesses of faith and a sign of veneration of the Holy Mother of God, as well as of trust in her maternal protection.

The Church blesses such objects of Marian devotion in the belief that "they help to remind the faithful of the love of God, and to increase trust in the Blessed Virgin Mary."

♥ The "Akathistos" Hymn
In the Byzantine tradition, one of the oldest and most revered expressions of Marian devotion is the hymn of the "Akathistos" — meaning the hymn sung while standing. It is a literary and theological masterpiece, encapsulating in the form of a prayer, the universally held Marian belief of the primitive Church.
Excepted from the Directory on Popular Piety and the Liturgy

Important Feast Days for us as a family  are~
1st Joseph the Worker
13th Our Lady of Fatima
20th  Ascension Day
22nd  Rita of Cascia,
24th Our Lady Help of Christians- Patroness of Australia
27th  Pentecost; Whitsunday, Sunday
31st Visitation of the Blessed Virgin Mary

MARY- Our Life, Our Sweetness and Our Hope