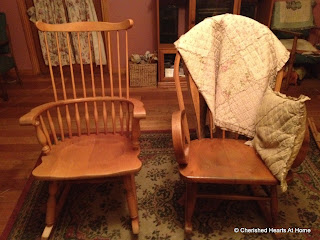 For years I have wanted to get my Honey a rocking chair of his own. It is not unusual to see him sitting in mine as he says he loves it so. Of course he will hop out of it if I need to sit in it with a baby or small child, but that hasn't stopped me from wanting to get him his own.
I long while ago I blogged about my love of this chair and the many instances of what it means to me and so I know how much it can just be a comfort thing. 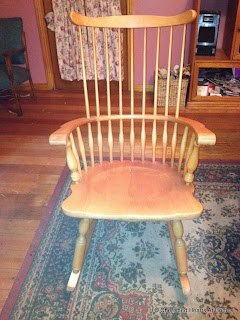 So as I was driving past the Antique shop we frequent on occasion I glanced out to see what was outside the shop.
Imagine my surprise to see a rocking chair sitting on the path. As this street is a one way street I had to go all the way around the block and come back again for a second look. All the while hoping and praying that no one else bought it in the meantime and that it would be at a price I was happy to pay.

I was actually able to park right in front of the shop, which was just as well as I had Trahaearn asleep in the car and no older child to keep an eye on him.
I got out and walked the 2 meters (leaving the car door open and able to see the baby) and looked it over. It had a tiny broken art of the top right runner that can be glued back on with wood glue and not other damage.
I tried it out and loved it!

So next up the price!! Would it be too much?
I searched all over and could not see a price. So I was determined to follow this up I went back over to the car and started to get the sleeping baby out of his car seat. While I was doing this the owner who we know fairly well came out the front door.

I turned and said I was just coming in to find him and how much was the rocking chair?
He came over to me and said " For me $70" I said- "done I'll take it" 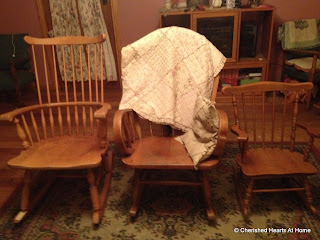 I was not able to fit it in the van at that moment as I had been shopping and had groceries in the back but I said I would pick it up when I cam back into town that afternoon.
He even said don't get the baby out now but just pay for it when I cam back in.

Now the next day was my Honey's birthday and wouldn't you just say that was a 'divine intervention?' Cause I would!

When I got it home I was so excited I just had to tell Stephen as he was away in Wagga already. He was worried about the price initially until I told him the bargain price.......now he loves the idea of a matching set of 'his n hers' rocking chairs.

Or is it the three bears.........look at the last photo with Corbyn's along side.
Just too cute isn't it!

Hmm this was a post I wrote before we left Tassie, I  hoped to pre-publish but never got around to it. So enjoy this look from our old home as it looks quite different now, lol

I love rocking chairs too!
My favourite is an Irish rocker which my hubby made many years ago.
It's my prayer-chair :-)
I hope you are all settling in to your new home, Gae.
I still miss you...
love..Trish