Last Thursday it being All Saints Day was a little unusual for us.
It started out as the monthly homeschool group meeting day that our children were excited to be going to for the second day, but also we had been invited to an All Saints Day Party. 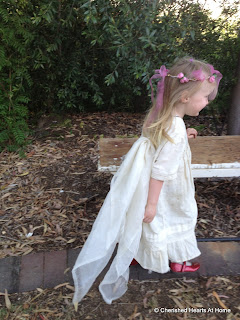 This was a very low key affair as our lovely hostess told me quite late the night before.
Simple a dress-up as your saint and tell a little about them and we will have a few treats for the children and adults as well.
This was something we had always wanted to do as we have always celebrated this at home and the thought of sharing this feast day with others was wonderful. 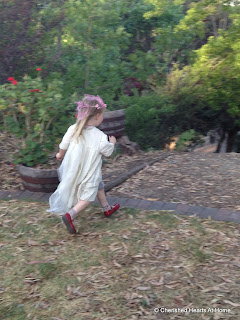 Once again we did not go all out for costumes but simply used what we had at home and could be assembled very quickly. Anna-Lisa was still visiting and made a chocolate cake (for the third time in four days) and we took that with us to share. 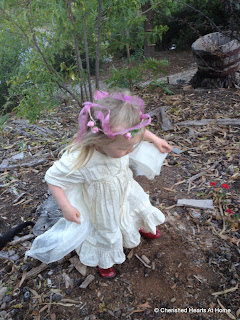 It was a great idea, the cake, as we used it to sing a version of "Happy All Saints to you" and then cut the cake and of course the children all were very saintly and ate of this heavenly food.
We actually never got around to telling the saints as the children had a very exciting time playing together and we adults were very content to talk and monitor the children. 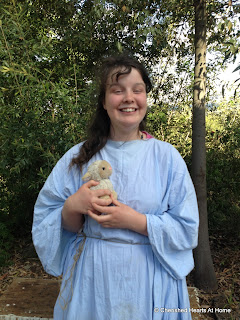 I did have to get these photos after the very exciting day and so perhaps they are not the best ones we could have had and the idea of getting the children who had dressed up in a group photo was another thing that just was not a viable option. 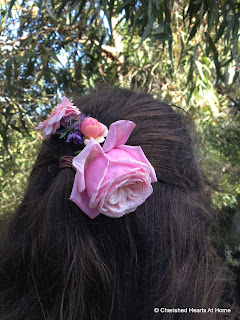 I love these roses in Vellvin's hair. They were picked form the garden where the party was held and I was given some for my hair as well.
Rogan had lots of fun creating the blood on the stone for St Stephen as well as the gash on his head. 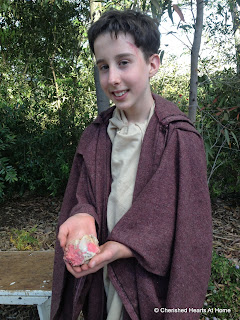 He almost convinced his Dad when he came home that he had had a terrible injury......almost but not quite.
St Dymphna this year was Myffwyn as we love these peasant style saints as they are so easy to dress up for 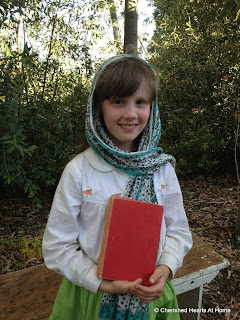 They also make playing at a party easy too, lol
Moran wanted to be Mary's mother this year and so we created this outfit for her. 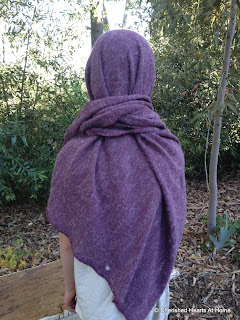 She especially wanted this head scarf and insisted I take a photo of it from behind.
One of the beauties of owning a Jedi cloak is the fact they can be used for many purposes. This time it was St Francis and all we needed was some rope, rosary beads and some puppets. 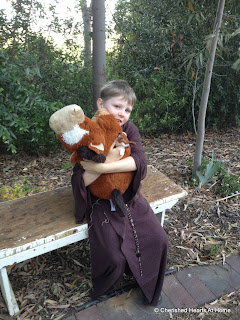 Of course we discovered when we got home that St Francis had not only lost his rope and rosary beads but his feathered and animal friends he had taken with him had somehow been, well, misplaced.
So he being the saint he is was soon found some other animal friends and his habit was help together with some string instead.

On Sunday when preparing for Mass I found his feathered companions in my hand bag!

So a very simple and happy All Saints Day for us this year.
Perhaps one day we will have a major feast with much food and games....perhaps!!

I enjoyed looking at your photos!

I like simple. When things get too complicated I don't cope and all the fun disappears. I find that my children are more than happy with simple celebrations. A few dress ups, lots of friends and cake...perfect!

It sounds like you are settling into your new home and making lots of friends. Isn't it wonderful how people are so welcoming?