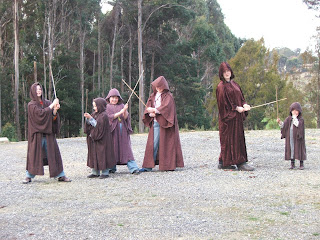 For some unknown reason we are going through the "Star Wars" mania again. We seem to go through this stage every year. Each time it happens the children make things to be Jedis. About 2 years ago Saxon wanted a Jedi cloak for his birthday. I bought the fabric at the nearest Spotlight about 1 hours drive away and started making the cloak along with some other items the night before his birthday. Of course this was the night my sewing machine would not work and so there was no cloak for his birthday the next day. 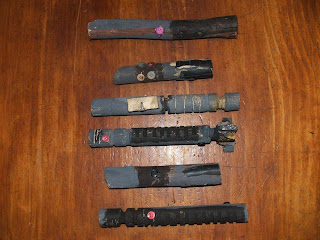 However Mama(Grandmother) was coming to stay a couple of days later and was able to get the sewing machine to go. I have since acquired a new sewing machine but the old one would still work for Mama. Saxon's cloak was very popular and all the other children wanted one. Since Mama was still here she made 5 other cloaks as well from the pattern we created ourselves. 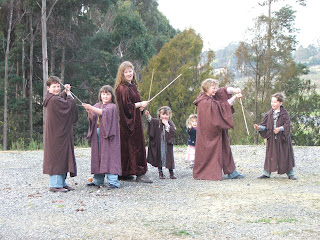 The children have used these cloaks constantly and some have been passed down to younger ones and now Saxon needs a new one again. As they have watched the movies this time they have each worn their cloaks and been the character they have chosen and carried their lightsaber handles they have made.
During this time of Star Wars mania the children have made lightsaber handles out of a wooden broom handle. They found an old broom handle and cut it into various lengths, depending on which lightsaber each child had chosen. Each one was then marked with the same markings as the character's lightsaber. To achieve this they cut notches, lines and added switches of wood and or buttons for the buttons. They were then painted with acrylic paint and the end was painted the colour of the "light" the lightsaber was. 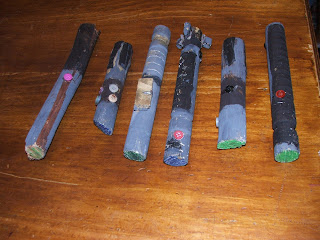 We have since decided if we could get very long Glow sticks and drilled a hole in the end of the handle we could glue in the glow stick and the lightsaber would glow like in the movies. They plan on trying this one night soon.

The photos of the children in cloaks are 2 years old.We don't have a current photo similar to this one as yet.
Shared by ♥ Gae at 12:43:00 AM

My children saw this post and insisted on reading it!!! There was much excitement and pleading for such wonderful cloaks! LOL! Beautiful!