Called to be Mothers 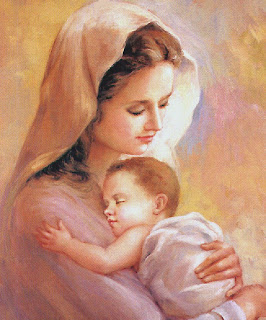 Years ago I was given a little pamphlet. For many years it was on my fridge door. Not only did I find the picture inspirational but also the commentary.
I would like to share that commentary with you and hopefully inspire you in your role as mothers.
It is written by Elisabeth Elliot a well known Christian writer.

"You mean that's all you do?"
That's all? As a mother, your life is given to taking care of people--small ones, to begin with, whose wants never seem to cease. Sometimes when your days seem to be wholly taken up with wiping things-- dishes and sinks, little runny noses and big slow tears--you wonder about what "fulfillment" is supposed to mean to you. You wonder about being (besides the perfect wife and mother) the hostess--with--mostest, creative, intellectually productive, beautiful..... and slowly your dreams seem to evaporate.

You've been listening to what they're telling us nowdays about how important it is to find yourself, express yourself and assert yourself. Maybe you're thinking that you're nothing more than somebody's wife and somebody else's mother. And what kind of life is that?

There is a tribe in the Southern Sudan called "Nuers" where a woman's name is changed not when she becomes a wife, but when she becomes a mother. She is "ManPuk"--"Mother of Puka." Among the Nuers, being someone's mother is what makes a woman's life meaningful. Two thousand years ago there was another young woman, of the Jewish tribe of Judah, who understood that truth. The world has never forgotten her--Mary, the mother of Jesus--because she was willing to be known simply as Someone's mother.

Motherhood is a calling. It is a womanly calling....and let's not be cowed by those who extinguish the light and joy of sexuality by persuading us to forget words like manly and womanly. At the beginning of time when God made the first man and the first woman in His image He put both under the divine command to be fruitful. The woman's obedience to that command meant self-giving. First she gave herself to her husband--he initiated, she responded--then she gave herself for the life of her child.

A woman knows, in the deepest regions of her being, that it is this very self-giving for which she was made. Single or married, her level of maturity is measured by how much she gives to others. If she's married, she gives herself to her husband and she receives. If she is a mother, she loses her life in her child and--mysteriously--she finds life.

A woman knows that no one can really say where the giving ends and the receiving starts. It is no wonder we are confuse when urged to look for some "better" or "higher" vocation in which to "prove our personhood." No wonder we are distressed to be subjected to male standards, or told that the notions of femininity and masculinity are obsolete.

Old fashioned notions they are indeed, but they weren't our own to begin with. They were God's. He planned the whole system, and it's God Himself who call. He calls some to be single, some married people to be childless, but He calls most women to be mothers.
There are, the Bible tells us, "differences of gifts," and they're all given to us according to God's grace. None of the gifts of my own life--not my "career" or my work or any other gift--is higher or more precious to me than being someone's mother.

If our calling is to be mothers, lets be mothers with all our hearts--gladly, simply, and humbly--like that little peasant girl Mary who spoke for all women for all time when she said "Behold the handmaid of the Lord; be it unto me according to Thy word" (Luke 1:38)

I find this really inspiring in today's world, where we are not encourage to be as God has called us to be, but that we should follow the worlds standards in regards to femininity and our value as simple wives and mothers.
May we have the courage to look the world in the eye and say I am a Wife and Mother as God has called me to be and be joyful in that role.

May your day be full of the joy of being simply "someone's wife and mother."

Thanks for posting that. I needed to hear that today.
In Christ,
Mary Beth

Beautiful Gae.Thank you!You have so much inspiration in this blog.Blessings,Marla Grace