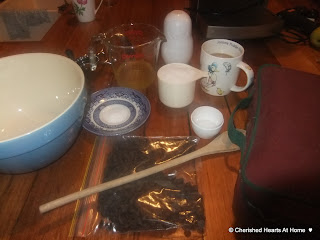 Each Holy Saturday evening we celebrate  two traditions in our home.
One is to make Caterpillars to add to our Easter basketsthis evening so  that when the children come down in the morning on Easter the caterpillars have become butterflies.

The second tradition is to make what we call Resurrection cookies.......
Now it sounds a lovely tradition and one day, perhaps when our children are all bigger and don't get really tired this will go smoothly as outlined  below.
However with our little ones they are often tired and so do not always respond as well as we would like (just so you realise we try to do these traditions as best we can with the circumstances we have. Our little children do not always respond as we would like as we continue forward each year. They get tired and cranky and frankly so do we).


Resurrection or Easter Story Cookies ~
(For a cane sugar alternative we used xylitol with a direct exchange of quantities. However our children found it way too sweet, so I would advise using less) 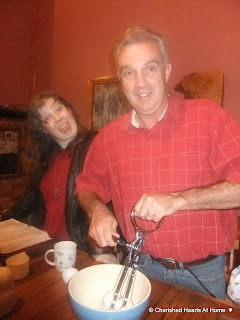 2.  Place pecans in ziploc bag and let kids beat them with the wooden spoon to break into small pieces.
Explain that after Jesus was arrested, He was beaten by the Roman soldiers.
Read: John 19:1-3......
Then Pilate took Jesus and had him flogged. The soldiers twisted together a crown of thorns and put it on his head. They clothed him in a purple robe and went up to him again and again, saying, "Hail, king of the Jews!" And they struck him in  the face.


3.  Let each child smell the vinegar.
Add teaspoon of vinegar into the mixing bowl. Explain that when Jesus was thirsty on the cross He was given vinegar to drink.
Read John 19:28-30......
Later, knowing that all was now completed, and so that the Scripture would be fulfilled, Jesus said, "I am thirsty." A jar of wine vinegar was there, so they soaked a sponge in it, put the sponge on a stalk of the hyssop plant, and lifted it to Jesus' lips. When he had  received the drink,Jesus said,"It is finished." With that, he bowed his head and gave up his spirit.


4. Add egg whites to vinegar.
Eggs represent life. Explain that Jesus gave His life to give us life.
Read John 10:10-11....
The thief comes only to steal and kill and destroy; I have come that they may have life, and have it to the full. "I am the good shepherd. The good shepherd lays down his life for the sheep."


5. Sprinkle a little salt into each child's hand. Let them taste it and brush the rest into the bowl.
Explain that this represents the salty tears shed by Jesus' followers, and the bitterness of our own sins.
Read Luke 23:27......
A large number of people followed Him, including women who mourned and wailed for Him.


6.  So far the ingredients are not very appetizing.
Add 1 cup of sugar. Explain that the sweetest part of the story is that Jesus died because He loves us. He wants us to know and belong to Him.
Read Psalm 34:8.....
Taste and see that the Lord is good; blessed is the man who takes refuge in Him~and
John 3:16.....
"For God so loved the world that He gave His only begotten son, that whoever believeth in Him shall not perish but have everlasting life." 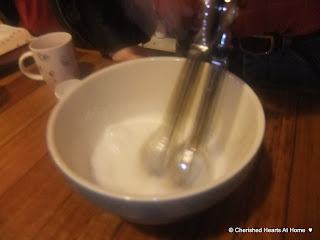 7.  Beat with a mixer on high speed for 12-15 minutes until stiff peaks are formed.
Explain that the colour white represents the purity in God's eyes of those whose sins have been cleansed by Jesus.
Read Isaiah 1:18....."Come now, let us reason together," says the Lord. "Though your sins are like scarlet, they shall be as white as snow; though they are red as crimson, they shall be like wool."
And John 3:1-3 .....
Now there was a man of the Pharisees named Nicodemus, a member of the Jewish ruling council. He came to Jesus at night and said, "Rabbi, we know you are a teacher who has come from God, for no one could perform the miraculous signs you are doing if God were not with him." In reply Jesus declared, "I tell you the truth, no one can see the kingdom of God unless he is born again."


10. Explain that each mound represents the rocky tomb where Jesus' body was laid.
Read Matthew 27:57-60......
As evening approached, there came a rich man from Arimathea, named Joseph, who had himself become a disciple of Jesus. Going to Pilate, he asked for Jesus' body, and Pilate ordered that it be given to him. Joseph took the body, wrapped it in clean linen cloth, and placed it in his own new tomb that he had cut out of rock. He rolled a big stone in front of the entrance to the tomb and went away.


11. Place the cookie sheet in the oven, close the door and turn the oven OFF. Give each child a piece of tape and seal the oven door. Explain that Jesus' tomb was sealed.
Read Matthew 27:65-66....
"Take a guard," Pilate answered. "Go, make the tomb as secure as you know how." So they went and made the tomb secure by putting a seal on the stone and posting a guard. 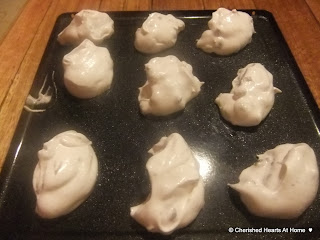 12. GO TO BED. Explain that they may feel sad to leave the cookies in the oven overnight. Jesus' followers were in despair when the tomb was sealed.
Read John 16:20....
"I tell you the truth, you will weep and mourn while the world rejoices. You will grieve, but your grief will turn to joy."
And John 16:22......
"So with you~ Now is your time of grief, but I will see you again and you will rejoice, and no one will take away your joy."


13. On Easter morning, open the oven and remove the cookies.
Take a bite. Notice~the cookies are hollow.
On the first Easter Jesus' followers were amazed to find the tomb open and empty.
Read Matthew 28:1-9.....
After the Sabbath, at dawn on the first day of the week, Mary Magdalene and the other Mary went to look at the tomb. There was a violent earthquake, for an angel of the Lord came down from heaven and, going to the tomb, rolled back the stone and sat on it. His appearance was like lightning, and his clothes were white as snow. The guards were so afraid of him that they shook and became like dead men. The angel said to the women, "Do not be afraid, for I know that you are looking for Jesus, who was crucified. He is not here; He has risen, just as He said. Come and see the place where He lay. Then go quickly and tell His disciples: "He has risen from the dead and is going ahead of you into Galilee. There you will see Him. Now I have told you." So the women hurried away from the tomb, afraid yet filled with joy, and ran to tell His disciples. Suddenly Jesus met them, "Greetings," He said. They came to Him, clasped his feet and worshipped Him. 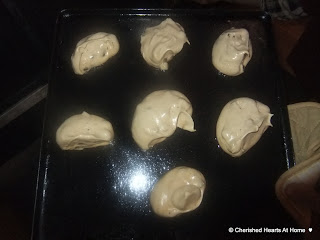 On Easter morning we took out our tombs, they seemed a little soft and spongy, but seemed to grim up as they cooled down......then we  and ate them.
Like I said they were quite sweet BUT they hadn't hallowed as they do normally. I think the xylitol needed to be cooked at a higher temperature than over night on low, which isn't what the recipe calls for in this case. But to make a meringue normally you will need to cook it on a high temp, and it will be crispy on the outside and soft on the inside.

Also the fact that we went to the vigil and it was about half past ten when we got back. :P
If you had more than one tomb though you would get very thirsty.
Love Vellvin.

Oh, I was hoping you figured out how to do a sugar free version. This is the version we make, too. We are just grain free and try not to use too much sugar, if possible. I love the tradition of making ressurection cookies.

On another note, I promised our to send you our bread recipe. I blogged about it awhile back, but don't know if you saw it. Here is the link: