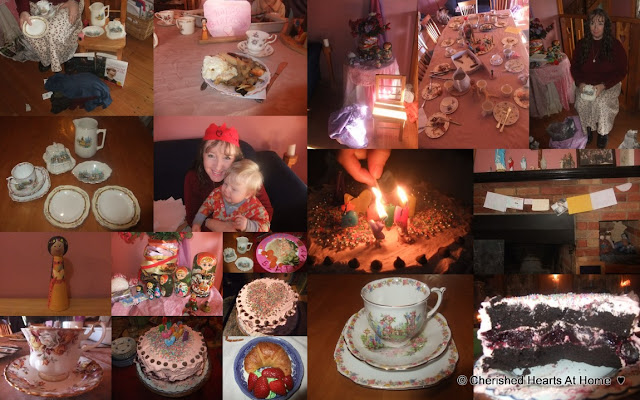 Three days past I was awakened from a dreamless sleep by my beautiful sister Autumn. She had roused me at the insane hour of around 8am so that we could make a "delishus" breakfast before our Mother, who's birthday it happened to be, woke up.
By the time we had finished making an interesting breakfast of 2 different types of gluten free sausages, fried tomato and cheese, eggs, and onions and mushrooms, almost everyone was awake and downstairs.

After a short while, the entire family (minus two handsome young lads who were away studying at college) sat down at the table to enjoy a truly scrumptious breakfast.
"Where does the time go" some say. And though I have not yet found the answer I too feel obliged to ask the question.  For after having cleaned up breakfast and the like it was much later then any of us had expected.
Anyhow, eventually we got around to opening the presents. Among the presents presented by the presenters were teacups, a butter-dish, and saucers. And as usual she received several books, something she almost always asks for.
Eventually Mummy reached the bottom of the bag and after tens of thousands o' photo's had been taken it was time for the great lolly trading to begin!

Rumours had circulated a few days prior that Mummy didn't want party bags for her birthday but eventually to every one's relief the rumours were put to rest and announced to be false.
Happy with our lot we began trading one type of sweet for another depending on what your preference was.
Before too long it was lunchtime which was  croissants with butter, cream and jam. Someone left the stove a little bit too high so that lunch was slightly overdone though luckily did not resemble coal.
Following that the afternoon was very relaxing, everyone not doing much, just enjoying what they were doing.

And as I said before, time travels fast and before too long it was time for the end of the day meal known as...DINNER! Dinner was some sort of curry prawns and soaked rice. Me, being not very fond of prawns lived mostly off rice that night, though it was,(and I'm sure everyone else agrees with me) an excellent dinner.
One must always be careful on birthdays though, to not stuff themselves too much so as to leave room for the cake!
So after everyone had nearly stuffed themselves it was cake time. We lit the candles, turned out the lights and sang "Happy Birthday". Mummy then blew out all the candles with one blow and then we all dug in. The cake was delicious what with it being multi-layered and having cream and some sort of cherries in it. AKA her usual Black Forest Cake
Then it was bedtime for the little kids and make-coffee time for me. And thus ended another great birthday.
by Saxon