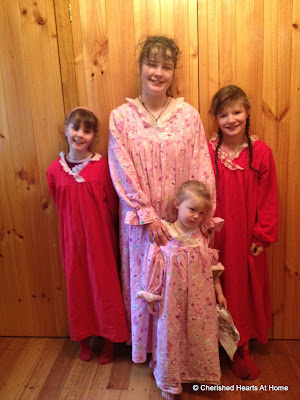 They are done!!
The nighties that I had started way back when I started sewing these for Moran and Myffwyn.
I finished them about two weeks ago but have not had time to post them.
I also wanted to get a photo of the four girls together in them and they kept not wearing them at the same time.
So finally I remembered in the morning after they had been  sleeping in them, hence the slightly disheveled look. 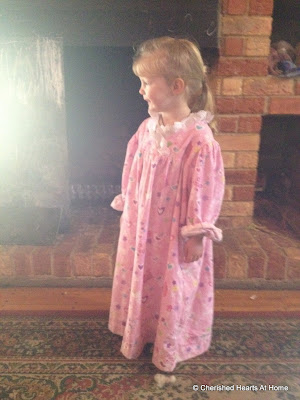 Arwen's  are still a bit too long in the sleeves. I haven't mentioned here the fact that I actually put one of Arwen's arms on to Vellvin's nightie and did not know until I had completed it with a beautiful over locked edge too.
I had to undo it and do it again but by then I had already finished the other arm of Arwen's and could not adjust it, so I will be gathering the sleeve up soon. Until then she wears the sleeve rolled up and well there is growing room I guess. 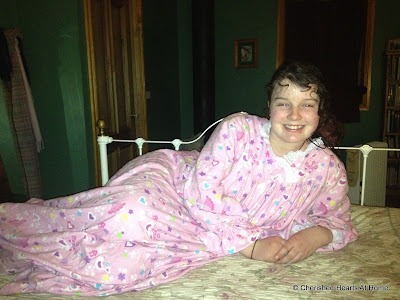 Sweet gentle Vellvin loved hers and was so patient getting hers finished. It was her idea for a nightie for winter as she loves wearing them and her old one is a little small now.
She did want to have all younger girls to have them together but was content to wait for the other girls to have theirs first. 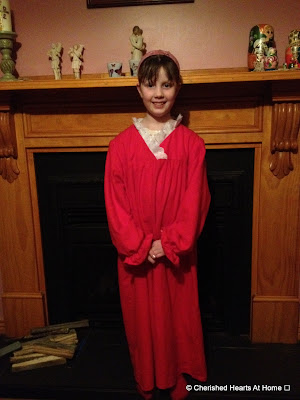 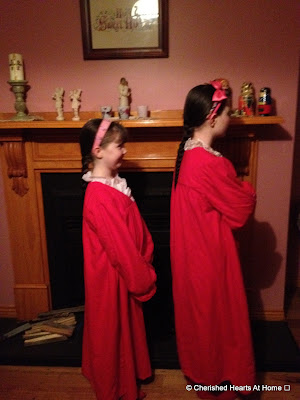 I just adore the red flannel look don't you?

So now our sewing project will be making some Spring and Summer clothing as we really do not have much as the weather in Tasmania does  not get that hot.
But I believer the weather in Wagga is already warming up compared to here so, yes, we will be hitting the sewing machines after we move quite quickly I think!

They look great.. I keep thinking I want to learn to sew!

I love the nighties! What a cute pattern. I am also a red flannel fan! It is so cozy and reminds me of cool winter nights in fron of the fire.