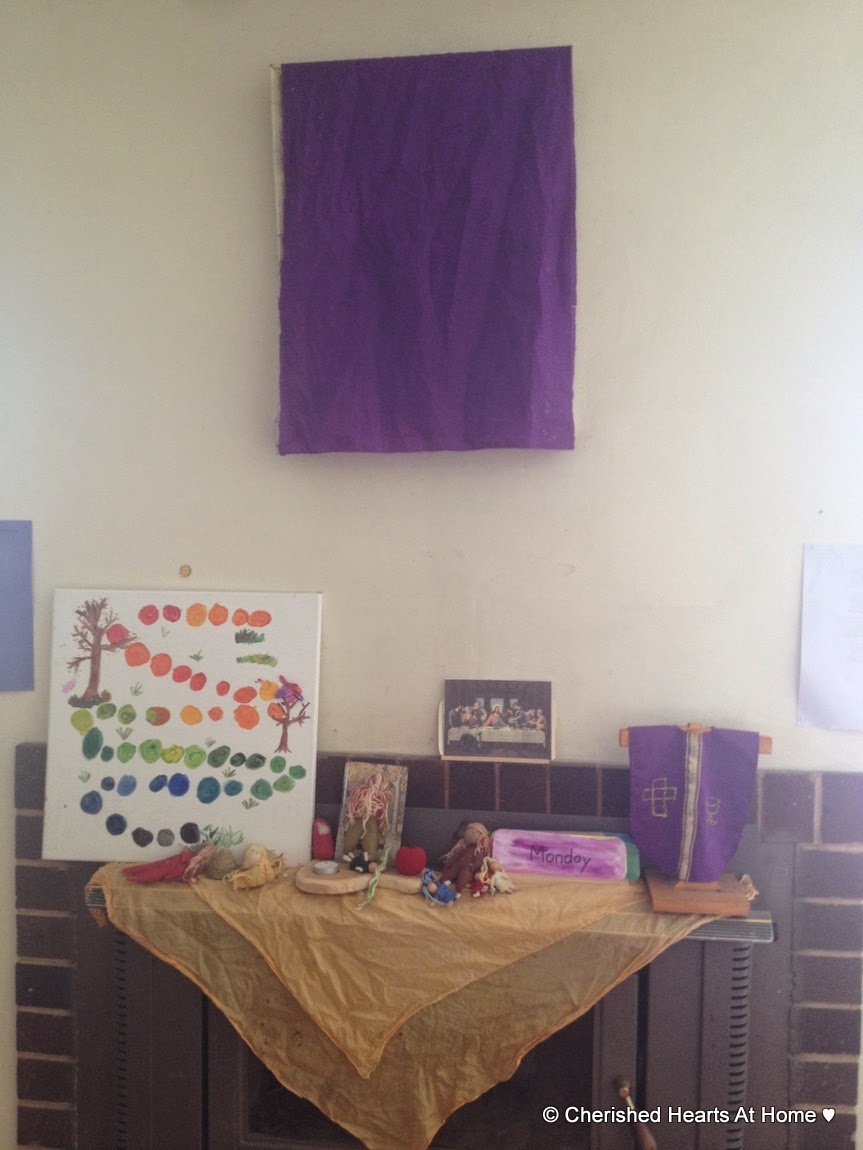 A whole week has passed since we had Passion Sunday but I wanted to share some of the traditions that are part of this day.

In our home we cover or hide all our statues and holy pictures.
We do this as a  continuation of what is celebrated Liturgically  so we can continue to dwell and reflect upon what is happening in our Church Year.

We don't really have a food dish for this but we could easily have a pea soup as you can read below to find out about :)

A week before Palm Sunday, the 5th. Sunday of Lent, is called Passion Sunday.  All the crucifixes, statues and paintings of the saints are to be covered (veiled) by purple cloth or sewn coverings Saturday evening after vespers.  Only the Stations of Cross are not covered.  The veiling is removed at the Gloria of Holy Saturday Mass.
There are two reasons for this.  One is because when the Jews pick of stones to kill Jesus, He hides until He allows Himself to be arrested on the Thursday after the Passover Meal.  So the hiding the statues reminds us of Jesus being in hiding.  The second reason is that in some places of , a large cloth was hung in front of the sanctuary on the first day of lent.  It was a reminder to repenting sinners of being banished from the Holy Mysteries till Easter.  It was not removed till “the veil was torn in two” at the death of Jesus on Good Friday.

Dom Gueranger reminds us that the Church begins (on Passion Sunday) to make the suffering of Jesus, our redeemer, to be the main thought focused on during these days leading up to and including Good Friday.

The Passion Narrative was originally read on this (5th) Sunday of Lent.  Now, in the Missal of 1962, it is only read on Palm Sunday (St. Matthew’s Gospel), Tuesday (St. Mark’s Gospel), Wednesday (St. Luke’s Gospel) and Friday of Holy Week (St. John’s Gospel).- From Traditional Catholic Priest

It is interesting to read about the various reasons for this but this is a good version as shared below:

The eating of Carlin peas during the period of Lent bears no religious significance but instead, seems to be linked to the civil war of 1644, where the Royalist Newcastle was under siege from the Scots.  The lack of food meant that the people on both sides of the were dying of starvation.
Legend has it that a French ship managed to dock at with a cargo of Maple Peas.  Other tales, tell of  a ship, laden with peas, which became stranded at a fortnight before Easter Day. The peas were washed ashore and salvaged by the locals.
The real story is lost in time but for centuries, Passion Sunday (the fifth Sunday of Lent),  in some Northern regions of , became known “Carlin Sunday” and the small brown peas became popular at this time.
Although it would appear that the folklore is strongest in the North East, the tradition of eating Carlin peas at this time has spread to other areas of Northern England, Yorkshire and .
There is a Northern saying;  “Tid, Mid, Miseray, Carlin, Palm, Pace-Egg Day”, which helps people remember the order in which the days fall.
An explanation
The saying is derived from the psalms, hymns and Sundays of the Christian religious period of Lent.
Tid – Second Sunday in Lent when the Te Deum Laudamus hymn was sung,
Mid – The third Sunday when the Mi Deus Hymn was sung.
Miseray – the fourth Lenten Sunday, was when the Miserere Mei Psalm was chanted.
Carlin – Passion Sunday, the fifth Sunday in Lent, adopted by the North Eastern regions as Carlin Sunday.
Palm – Palm Sunday, the sixth and final Sunday of lent.
Pace Egg – A corruption of “Pasch” from the Latin and Greek root for “Easter”. Easter Sunday is the first Sunday after Lent- from Heritage and History