Our Lady of Ransom

OUR LADY OF RANSOM 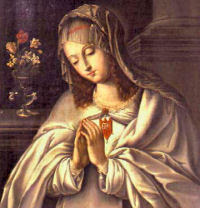 This is my prayer to you, my prayer for your favor. In your great love, answer me, O God, with your help that never fails: rescue me from sinking in the mud; save me from my foes.

The Blessed Virgin appeared in 1218 in separate visions to St. Peter Nolasco, St. Raymond of Penafort and James, king of Aragon, asking them to found a religious order dedicated to freeing Christian captives from the barbarous Saracens or Moors, who at the time held a great part of Spain. On August 10, 1218, King James established the royal, military and religious Order of our Lady of Ransom (first known as the Order of St. Eulalia, now known as the Mercedarian Order), with the members granted the privilege of wearing his own arms on their breast. Most of the members were knights, and while the clerics recited the divine office in the commanderies, they guarded the coasts and delivered prisoners. This pious work spread everywhere and produced heroes of charity who collected alms for the ransom of Christians, and often gave themselves up in exchange for Christian prisoners. This feast, kept only by the Order, was extended to the whole Church by Innocent XII in the 17th century

Would you risk your life to free someone from a concentration camp? Would you take the place of a prisoner? Would you sacrifice comforts and even necessities to save a slave? Would you pray and do penance for the freedom of Christian captives?

These things were done by the followers of Christ from the earliest days, but especially during the Middle ages. At that time the enemies of Christ's Church had conquered a great part of Christian territory and had carried off into slavery many thousands of Christians. Hit and miss, though heroic, efforts to free these unfortunates had been made here and there. 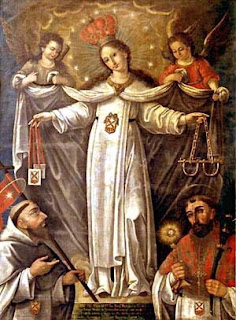 The Church decided to organize the work of ransoming slaves. In 1198 St. John of Matha and St. Felix of Valois founded the Trinitarians. From then until 1787 they redeemed 900,000 captives. The Order of Our Lady of Ransom, called the Mercedarians, and founded by St. Peter Nolasco, ransomed 490,736 slaves between the years 1218 and 1632. St. Vincent de Paul, a slave himself, led his priests to save 1200 Christian captives in the short period between 1642 and 1660 at the staggering cost of 1,200,000 pounds of silver. An even greater achievement was the conversion of thousands in captivity, and steeling them against the sufferings of a cruel martyrdom for the faith.

All this has been admitted by a modern, competent Protestant historian, Bonet-Maury. He records that no expedition sent into the Barbary States by the powers of Europe or America equalled "the moral effect produced by the ministry of consolation, peace and abnegation, going even to the sacrifice of liberty and life, which was exercised by the humble sons of St. John of Matha, St. Peter Nolasco, and St. Vincent de Paul."

Our Blessed Mother herself appeared in a vision to St. Peter Nolasco, and requested him to found a religious order devoted to the rescue of captives. This was in 1218. Previous to that, since 1192, certain noblemen of Barcelona, Spain, had organized to care for the sick in hospitals and to rescue Christians from the Moors. St. Peter Nolasco, St. Raymond of Pennafort, and King James formed the new Order of Our Lady of Mercy. The group included religious priests who prayed and gathered the means, while the lay monks or knights went into the very camps of the Moors to buy back Christians, and, if necessary, take their very places. We have mentioned the magnitude of their success, a success that was won through the heavenly assistance of the Mother of Mercy, Our Lady of Ransom.

Excerpted from the Feasts of Our Lady by Fr. Arthur Tonne 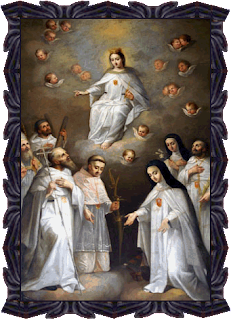 O God, Who by means of the most glorious
Mother of Thy Son
was pleased to give new children to Thy Church
for the deliverance of Christ's faithful
from the power of the heathen;
grant, we beseech Thee,
that we who love and honor her as the foundress
of so great a work
may, by her merits and intercession,
be ourselves delivered from all sin
and from the bondage of the evil one.
Through the same Christ, our Lord. Amen 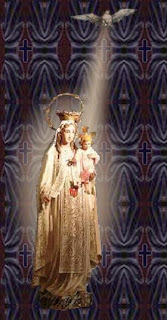