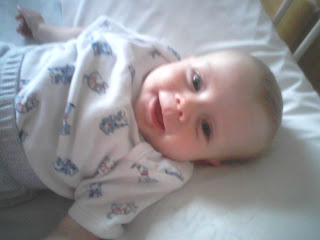 Yes after five days in hospital Trahaearn and I have returned home.
Thank you for all your kindness and prayers for our little dumpling.

Well, actually he isn't a round and chubby dumpling hence our visit to the Doctor and hence admittance to hospital.

So here is the rundown on the situation:
We have had over the past couple of months been trying to monitor Trahaearn's weight as he has not put on lots of weight and has even lost weight over time.

Trahaearn has been having medication for the reflux that the Doctor prescribed for him when we went to see him last. I am not sure if the dosage was right or not because he still kept sicking up after feeds and even in between feeds. However of course you know the whole time we were in hospital he DID NOT vomit like he had been at all. So perhaps the re adjustment of the medication was all he needed to stop this.

While in hospital Trahaearn had tests,what they were exactly I need to ask tomorrow, (update:when I asked no one was able to sahre the tests with me, so still need to find out) as they did not tell me and I was  a little surprised when we were discharged without being told what specifics they checked for.

Our little baby did have to have a blood test (2 attempts at this one, my poor baby), a sample of poo and wee  (I had to catch that sample in mid air.....a challenge for sure) and an ultrasound which was clear.

In between all this was the various conversations with the Pediatric team and nursing staff was well as the Lactation Staff on what we should do. Of course the Doctors wanted him to start solids straight away (which is what the Dr told me at three months and put me off going back to see him). I did not want to do this and so we then had the discussion (well they decide and then tell you why you should do it like they want you too) about supplementing with formula. Again I wasn't too thrilled but agreed as I wanted Trahaearn to put on weight. Of course our little boy did not like the formulae and refused to drink it. Did you know that Trahaearn means  'strong as iron, Oh yeah, we are going to have to watch this boy I am sure. Perhaps he gets this stubbornness from some where......

Back for the next attempt at an idea.

Working in this post on Sunday night - second attempt as i lost all I had typed up when the power on my computer went off and now said Baby is awake again.

Well we came home with a plan to feed every 3 hours and express after a feed and then give the expressed breast milk (EBM) in a bottle every feed as well.
Did I mention our children are not very happy about mummy 'spressing' again and Saxon said tonight that 'spressing' sounds very much like stressing.

Well this seemed a fine plan but when I went to weigh Trahaearn at the hospital today he had lost weight again. So I was just a little stressed about this and not knowing what to do to help him put on weight.

So phase three of the plan was to continue with the other plan but to wake him during the night. Did I mention that he sleeps all night and this is the only really good sleep he has. I am not really looking forward to this as I do like my night sleep, that is when the other small children  stay in their own beds.
so we are on three hourly feeding and bottle feeding along with expressing during the night...wish me luck with this.

Also we will be adding some formula to the  EBM until we can  increase our milk output that hopefully will be assisted by some medication I received today.

After arriving home today I spoke to  a friend on facebook who has some specialty in this area and she gave me some much needed ressurancea and lots of information and advice.

So the short version is we are now expressing every 11/2 hours and feeding every 2-3 hours. Until Trahaean gains weight and I am sure my milk supply is 'happy' we will use the formula too....for mummy's piece of mind really.

So all in all I think I will wrap up here now and have a few minutes before the next feed.

Amen !! Gae I'm so happy to read this !
you know you mentioning solids reminded me of how they would have babies in the 1950's & 60's eat rice cereal at 3 weeks old something like that !!
Your little babe reminds me of your older ds the one with the hat lol I am so bad with names is that Saxon ?
I have Evan our grandson over and it is so nice to be granny for a day again .
Thanks for the update and we shall keep praying . Bob was quite concerned so I'll let him know you are back .

Gae--If it's not one thing it's another, right? You obviously know how to nurse a baby successfully, but nothing like a situation so different than past experiences to humble us. I know that Our Lord will see you through this.
He looks very happy and healthy in the picture you posted.
I will continue to pray for you and your little boy--he just wanted to make sure that since he is # 12, he got enough attention!lol

continued prayers... I am amazed that, they should want you to wake him at night, sounds like you both could do with the sleep!

Hope a solution is reached soon. My friend had the same prob with her daughter, they eventually diagnosed a tongue tie and I do have to say she was heaps better when placed on solids at five months.

Gae, God bless you and Traehearn and your whole family as they adjust to the new feeding schedule and demands. You are in my prayers.

I'm glad you are back home. To me this all still sounds like food allergies (something that you eat and he gets through your milk), especially with the reflux. All my children were like your baby. As soon as I removed corn, dairy, soy, and gluten (sometimes all grains) from my diet, they did fine. Doctors never check on this because they believe that nothing can be passed on through breast milk. Why not try removing those things from your diet and see what happens? I think Tina wrote something similar here in the comments. Good luck to you.

One book I have found extremely helpful for this problem is the one by Kathleen Huggins. It has a whole section on babies that are not gaining weight and what to do about it. It also addresses food allergies and other irritants (chocolate, citrus, nuts) that get passed on through breast milk.

Oh poor Gae - and Trahaearn!
It all sounds exhausting to me!
I hope you get to find out what those tests were all about.
Surely they have to tell you!
I'm so glad he is home now and that you have a plan of action to help him gain weight.
I understand your hesitancy about using the formula.
I had to use it for my first son who was premmie and didn't feed well at all.
It got him through the early stages ok and although he's always been on the slim side, he grew up just fine.
Well..I also hope 'spressing doesn't mean stressing for you :-(
Keeping you and sweet baby in prayer, my dear friend.
lots of love..Trish

Continued prayers, dear Gae, for you and your precious boy! Peace and love, Annita +JMJ+

I'm glad to hear that you and Trahaearn are back home, but I am sorry to hear that you must endure all these stressful feeding times in order to help your little one. I pray that this next phase of feeding will help your son gain some weight.

Please keep us informed, and you and your baby will continue to be in my prayers.

So glad to hear you're both home. Keeping you all in thoughts and prayers.