January - Month of The Holy Name of Jesus 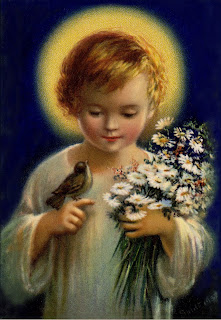 One of my Goals this year is to post some information on each month and the Liturgical devotion for that month. Each month  try to keep a little picture on the sidebar to remind myself of what the focus of the month is but I wanted to do more this year and so this is part one of achieving that.


January is dedicated to the Holy Name of Jesus. "In the name of Jesus every knee should bow, of those that are in heaven, on earth and under the earth" (Phil 2:10). Christ's name is chosen in heaven, and the Angel Gabriel announces it when he informs the Blessed Virgin of the incarnation: "Behold thou shalt conceive in thy womb and shalt bring forth a son, and thou shalt call his name Jesus". It is a name that has marvelous implications, for it means "savior." The very name bespeaks the magnitude of His mission, His infinite love, a love that will cause Him to offer Himself up for us.
The name of Jesus is the sweetest of all names, and He who bears it is most worthy of all love. He who calls Jesus his friend can be assured that this friend is the most devoted and unselfish of all friends.
Jesus is our all. In His name we may pray to the Father with assurance of being heard. In His name the Church administers all her sacraments. In His name she offers all her prayers and blesses homes, the fields, and the sick. In the name of Jesus she casts out evil spirits, and at the hour of our death bids us, "Go forth, Christian soul." She assures us that whoever shall call upon this name will be saved. When our soul has departed this life to seek its eternal home, the Church asks in the name of Jesus, "Eternal rest give unto him, O Lord."
According to the ancient mind, a person's name was the expression of his nature, work, or mission. Early Christians accordingly used our Savior's Name to bring to mind His adorable Person; and in their art they gave it the following shortened or symbolic forms:
a) The Chi-Rho Symbol. The oldest monuments bearing this symbol date to the third century, the first being found on a burial inscription of a consul from the year 369. From the third century we have the following authentic forms: (1) the separate letters; (2) the superimposed letters; (3) the monogram cross.

After the triumph of Christianity, the Chi-Rho monogram spread into all countries and found manifold use. It no longer served as a mere abbreviation of the sacred Name, but stood as a symbol for Christ the King. Artists often surrounded it with a laurel wreath or a circle. This signified Christ's dominion over the world, or His triumph over all enemies of His kingdom.
b) The IHS Symbol. The familiar abbreviation IHS is a symbol of the Name Jesus which has retained its popularity down through the centuries. It owes its spread to St. Bernardine of Siena, who had it placed on his banner, surrounded with twelve rays of the sun and surmounted by a cross. It soon became the most popular monogram for the holy Name of Jesus. By his fervent words St. Bernardine persuaded many priests to place the letters on altars or on the interior and exterior walls of churches. Many Italian cities responded to his efforts and put the monogram in large letters on the outer walls of their town halls, as may still be seen in Siena.

What is its derivation? IHC is the abbreviation of the Greek ΙΗΣΟUΣ, i.e., Jesus (the first three letters of the word). The older form for the Greek sigma, S, resembled our capital C. In Christian antiquity this monogram does not occur too frequently and may not be older than the fifth century. In recent centuries the IHS has been falsely interpreted as Jesus Hominum Salvator, or even Jesu humilis societas (and regarded as a colophon for the Society of Jesus). Another interpretation that is sometimes made is In Hoc Signo (vinces), and out of the added v (for vinces) three nails are formed.
c)

Ichthys. The early Church loved another monogram for our Savior's name, the widely-used ICHTHYS. Christ's full title was (in Greek): Iesous Christos Theou Yos Soter, Jesus Christ, Son of God, Savior. The initial letters of these five words form the Greek word ICHTHYS, which means fish. For this reason Christ is often pictured as a fish. Thus both the abbreviation and the picture became for the early Christians a secret symbol for the Redeemer. Yes, they even call our Lord "the great and pure Fish" (Aberkios tomb inscription, about 180). Tertullian presupposed popular familiarity with the fish symbol when he wrote about 200: "We (Christians) are born as little fishes in water after the model of our Ichthys Jesus Christ" (On Baptism, ch. 1).
d) The Cross as a Symbol for the Divine Name. The similarity between the Chi-Rho symbol and the Cross is so apparent that it was not long before the

two became related artistically. The Cross and the divine Name serve as symbols of redemption, and as a means of protection against the attacks of the demons. Thus it became customary to put the cruciform monogram on doors and houses. One of the more common methods for the cruciform arrangement involved the use of the two words Φως and ξωη (light and life), terms which Christ applied to Himself in John 8:12; 11:25. Jesus is our Light and Life, for He gives us divine faith and grace. The liturgy desires, prays for, and obtains light and life for the living and the dead. Here we have the reason why the combination of the two concepts, light and life, in the form of a cross became such a popular word symbol in the early Church and is frequently found on doors of houses (Syria), on tombs, and also on ampullas, terracotta lamps, and other articles. From Catholic Culture


For some easy fun use the colouring pages from Charlotte

Holy Name of Jesus colouring page
Blessings to you and your homes,