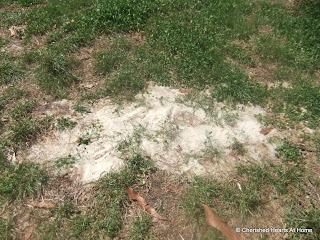 As part of our pantry elimination for our sugar free diet we gradually over the last weeks before officially starting ate the remainder of our sugar. I though we had used it up completely as we started our new regimen.

However I did discover we had some sugar left over in some unmarked jars. I had intended to keep this for visitors in their coffee and tea when they came to visit, as well as for our older boys when they came home.

Having that in jars though once discovered and used on oats by a certain 15 year old was  a sure recipe for disaster. What disaster could follow? Well when  Saxon found the sugar, it follows that those who follow him to the pantry would find it too and for little people who have been told 'no more sugar' well the temptation is too great. 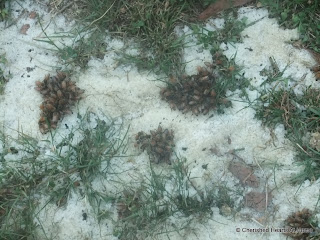 So I decided to just throw it all out!

I asked one of the older kids to throw it outside somewhere, which they did and thought no more about it.
Until  Rogan came in and said the bees were all over it.

He watched them for a while and decided that the bees were acting quite 'loopy' flying all over in quite a drunken like fashion and even flying into things. We all went to look and discovered that this was true. Not only were there bees sucking up all this sugar that had melted down but there were wasps as well, not my favourite at all.

This actually continued for almost a week  and they swarmed all over the sugar in clusters as you can see. It was interesting to watch but the children kept accusing me of  making the bees drunk!

We did manage to get a video of them too. I am not sure what this means to those bees and the honey they make, but, well I really didn't mean to have the bees collect it if I may say in my own  defence!
Blessings to you and your homes,

This is really interesting, Gae. I wonder if it's because sugar is an opiate? Maybe, the bees were drugged! It makes me glad that we went sugar-free, too :)

Best way to get rid of it once and for all!
m.

Oh, Gae, you are such the "corrupter" of the bees, LOL!
How fascinating! Thanks for sharing this!

This was such a fun story. I just stumbled onto your blog and had fun looking around at you beautiful Catholic family. I will continue to read you blog and follow your interesting adventures.

My sister and I actually just joined the Catholic-mom blogging community. I am a newly-wed, with just one child so far, so we don't have quite the adventures you are used to, but we are just as in love with the faith. Come visit! http://dosmallthingswithlove.blogspot.com/

Dear Nancy,
thank you for dropping by and leaving such a lovely comment. I stopped by tonight and loved your latest post
God Bless
Gae

I agree Maria, but I needed some for the visitors who stopped by afterwards :) I can't say I have missed it at all

:) You are too kind Judy

Erin you should have seen it, the kids were fascinated and started to collect some of them too :)

Hello Gae,
Good for you, going sugar free. We were sugar free for many years. We discovered that we enjoyed the taste of new foods--sugar tends to blunt the taste buds. Now that my children are adults some sugar is slipping back into the diet but overall we eat much healthier than when we began to make dietary changes.

Your adventure with the bees is interesting. thanks for sharing the pictures and video.
Carol