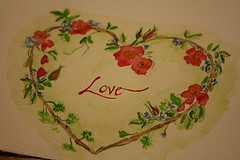 Well St Valentine's Day is coming up next week and it will be at the end of a big week of celebrations.

I am sure I will have a few more ideas and themes before this day but I really wanted to share these few yarn making patterns and these little stories, not about St Valentine but about Valentines Day.


STORIES:
The Valentine Sparrow -from here
Once upon a time, during the frigid winter months, there lived a tiny sparrow who was very lonely.  Because Father Frost was ruling the land, all the sparrows kept to themselves, fluffing their feathers to stay warm and hiding in the bushy trees for shelter.  They seldom ventured out except for a quick nibble of some sNIeeds or a drink from a puddle of melted snow.  There was hardly any talking or singing because the cold winter air would simply freeze their words and songs before it could ever reach another's ears!
The lonely little sparrow's heart ached for friendship.  She simply could not wait any longer for the Spring Fairies to arrive when there would be much singing and talking and playing and eating.  But what could she do?  She was certain that everyone else must be feeling the same.
Then she had an idea!  Father Frost might freeze spoken words and songs, but surely he couldn't freeze a special note written on birch bark paper.  Carefully and patiently,  the lonely little bird began to create individual notes with special pictures and words for each of her friends.  The more she created, the warmer her heart began to feel and the loneliness began to melt away.  When she had finished, she waited for Father Sun to climb as high as he could so the air would warm a little...then she dashed through the crisp blue sky, darting from tree to tree delivering her beautiful creations.  You should have seen the amazement and joy on all her friends faces as they read her warm words and marveled at her colorful pictures!

THE VALENTINE BAKER OF PINK - FROM HERE

Once on an island in the Pacific North West, there was a littlevillage called Pink.  It was a funny name for a town, but it wasnamed Pink after all the thousands upon thousands of cherryblossoms that bloomed there early each spring.  The townspeoplewere very proud of their unique and beautiful town in spring,and welcomed visitors of all kinds.
In the middle of the town square was a fine little cottage surrounded
by cherry trees.  This was the village bakery.  For many it was the
heart of the village.  And that was because the Baker baked with
joy and love.  Everyone said, ‘the Baker of Pink makes the tastiest
cakes in the world!’  The Baker’s specialty and favorite thing to
bake were heart shaped cakes for Valentines day – pink of course!
Word spread far and wide that if you ate one of these heart cakes
on Valentine’s day you would feel especially happy and cared for.
Needless to say, visitors came in droves to buy the Valentine
heart cakes, and the Baker worked very hard to bake enough for all.
Far away from the village of Pink, was a kingdom.  In this kindgom
was a castle, and there lived a kind King who had a beautiful
daughter, the Princess.  The King however, was worried about his
dear daughter, for she was always sad.  Nothing the doctors tried
to do helped.  Nothing the wise women offered helped.  The Princess
was still sadder than sad.  And this worried the King, for he loved
his daughter more than anything in the world.
One day a traveler came to this Kingdom and he heard from the
townspeople about the fate of the lovely Princess.  At once the
traveler had an idea, and he went to the gates of the castle.
‘Let me in, let me in, I have helpful news for the King,’ he called!
The guards brought him to the King, and the traveler told him
of the magic Valentine’s day cakes of Pink, and the Baker who
made them.  The King listened and was prepared to take his daughter
to Pink at once!
‘But remember dear King,’ said the traveler, ‘the Baker makes
these heart cakes on one day only!  You must arrive on Valentine’s
day for the magic to work.
So the King sent a royal messenger to Pink, to tell the Baker about
his sad Princess, and to please make the best heart cake for her
that he had ever made!
Then the day came for the journey to Pink.  The King and his dear
daughter, and many royal guards set off.  The journey would take 3
days.
Back in the village of Pink, the Baker was preparing for their arrival.
He ground the grain to flour, until it was so fine it was like star dust.
He went to his pantry and took out a locked, hand carved wooden
box.  Out of his pocket he pulled out a golden key and opened
the box.  Inside were his most amazing ingredients from all over
the world!
* Inside was a small bottle of vanilla his great-grandfather Baker
had brought home from far far away in China!
* Inside was a stick of cinnamon his grandfather Baker had brought
home from even further away in Madagascar!
* Inside was a jar of golden honey his own father Baker had brought
home from a beehive he found in a field of flowers in Mongolia!
* Inside was a spoonful of poppy seed he himself had found and saved
on a high mountain meadow walk in Russia!
The Baker nodded and said out loud, ‘now is the time to use these
ingredients.  The Princess needs their powers!’   And so the Baker
set to work to make Valentine heart cakes fit for a beautiful Princess.
At last it was Valentine’s day, and the whole village of Pink lined the
street to the center of town where the bakery was.  All around the cottage
the cherry trees were already blooming.  The aromas of the blossoms mixed
with the sweet smells of the baking made the whole town excited.
‘Here they come, here they come,’ the townspeople cheered!  The King
and the Princcess and all their guards were coming down the road!
Inside the bakery, the Baker was ready.  His kind face looked out the
window, and as the royal visitors got closer he saw the Princess.  He saw
that even with a sad face, she was more lovely than the cherry blossoms,
more beautiful than the sunrise, and his heart opened.
The Baker bowed when they entered his shop.  There was one table set
with a pot of warm peppermint tea, a pink teacup, and a plate with one
very special heart cake, all waiting for the Princess.
She sat down very daintily, and took a sip of tea.  Then she took one
bite of the heart cake.  Rosy color came to her face.  She took
another sip of tea and another bite.  Her sad mouth started to smile.
She took another bite, and her eyes started to twinkle.  With her last
bite, she sat back and started to giggle, then laugh!  She could not
help herself, she jumped up, hugged her father the King, and ran over
to the Baker and kissed him on the cheek!
The King was beside himself with joy!  ’Good Baker,’ the King said
grandly, ‘ you shall marry the Princess and have half my kingdom!!’
After the royal wedding, the Baker and the Princess chose to live in Pink,
in the rooms above the bakery.  The Baker taught his wife how to make
heart cakes, and together they lived well, worked happily in the bakery,
and never again was the Princess sad.
The End

I hope to make our Valentine's Day around our house extra special this year! For the first time I've read about the history of Valentine's Day. I've discovered the true history of St. Valentine and his martyerdom. Truly it's a holy celebration. But, the pink and reds, ribbon and lace, and hearts are such a sweet touch... a lovely way to remember his love for the Lord Christ.
Blessings and Peace to you and your children!!

Hello Gae. I don't knit, but I'm looking forward to checking out the patterns you provided. Also, I plan to share the Valentine's Day stories with my kiddos! Thanks for sharing with us. Happy Weekend!