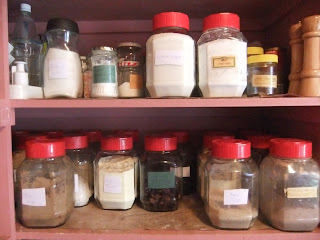 On Saturday morning Stephen thought of a fun activity for the day (NOT really) he said "lets spend a few minutes tidying up these rooms., before we move onto our other projects."

Of course the children were so very enthusiastic about this project and had no hesitation in starting right in........yeah right!
Except for saint Saxon and saint Braedon (according to Saxon), who himself soon lost interest in the project anyway while the rest continued on.

The few minutes lasted...well... some hours later, AS the children predicted. They have been down this path before with tidying up which really means - tidying AND cleaning, hence their lack of enthusiasm for the project. 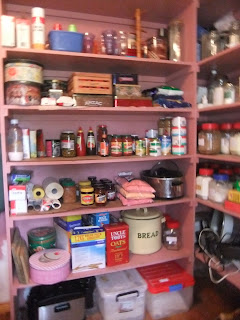 Stephen was egging on the children with the promise of 'fizzy drink' which is a special drink in our home, usually reserved for birthdays and special events.

Eventually Stephen made it into the pantry which is a sure sign for the children to PANIC as this invariable means pulling out the fridge and freezer,sweeping and mopping under them and everywhere else, sorting out stuff and rearranging the shelves.

It was here I took pity of the children and kept their Daddy company on a more full time basis. As he started to rearrange the shelves (don't they look beautiful) I started to relabel the jars that we store some of our food stuffs in. 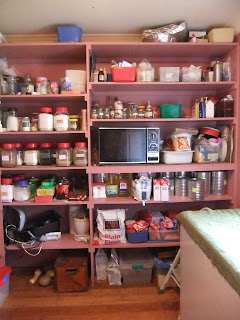 Back when Braedon was a baby I wanted to have lovely jars filled with baking supplies etc, so we bought a heap of Maxwell House coffee jars (I haven't seen them in years) to use, as this was a way to get the jars with out buying them.
I actually had some lovely labels I got in a cooking magazine that I contacted on to the jars.

Now as children get older and start cooking and with that refilling the jars as they get empty we have had some very interesting labeling options. Consisting of such things as: sugar in the jar marked Sultanas, or Custard Powder in the jar marked Soup Mix......I could go on but you get the idea.

So not having any more of those pretty labels anymore and not wanting to spend time creating more I simply got some plain paper, pen and sticky tape and made new labels for the jars that needed them and made sure (including changing the contents of some jars) that each jar actually had within it WHAT was IN the jar itself.
I must admit it looks lovely all tidy and clean like that, however short a time it stays like it.☺

It was actually funny to see little Arwen come along later and do some rearranging of her own of those low very nicely arranged shelves.

And that was the end of our Saturday.

The pantry looks lovely and so organized! :) Hope you are doing great!

I need to do that in my kitchen as well. In fact I have it planned for tomorrow. I won't have any little helpers though...and that is probably a good thing.

My pantry is due for a clean out too! But I am putting it off as I am sure it will involve tears and tantrums.
You need a label maker- I intend to attack my bottles with one in my next overhaul.

Dearest Gae,
What a blessing it was to have you stop by and visit at Pioneer Beauty..You have a very lovely place yourself..I enjoyed reading about the treasure hunt..our children seem very much alike...Blessings to you and I look forward to visiting with you again..
In Christ