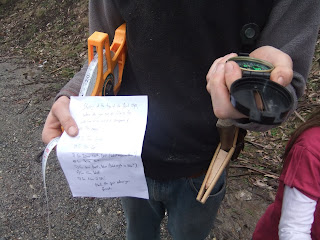 The flip side of our weekend after the cleaning was on Sunday when Stephen (what a busy little idea man he was last weekend) suggested a treasure hunt after someone uttered those famous words "I am bored". The traditional treatment in this case is to give that child something more rewarding to do in the way of community service....translation a JOB. 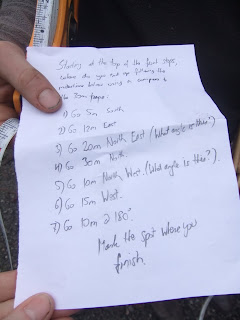 Stephen must have been a little soft hearted, what with it being Sunday and all, no not really, he loves to give the children treasure hunts to do fairly often and this was his weapon of choice on Sunday.
This time he said the children needed to use the compass that Arwen had so dutifully found lying around somewhere (after it had NOT been put back by whoever had it last) and was handing it to him and they would require a 30 meter tape measure.
He wrote out the clues on a piece of paper, on the other side which he kept, so no-one saw this side, he actually drew himself a map to keep (forgot to take a photo) for reference. 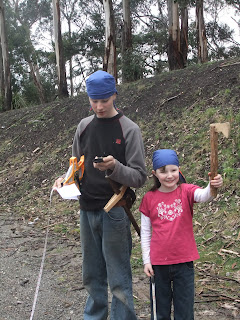 Saxon and Moran were the first to take up the challenge and were keen to get into the mood with some getting into character for a treasure hunt...... of course pirates were the choice of costume. 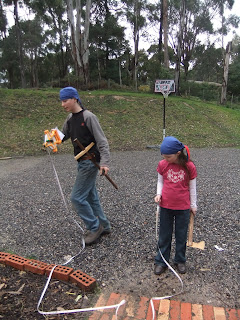 Here they are starting out with some necessary equipment: homemade wooden axe, sword, of course a compass is a given and tape measure and the all important map. The pirate head gear is so cool. 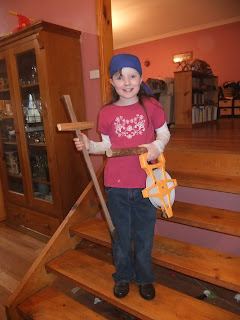 Moran was thrilled to have completed the treasure hunt and carried the gear back inside. 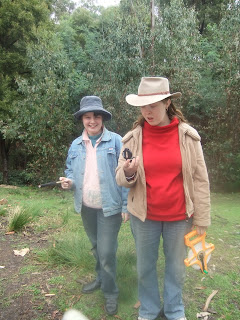 Next up Autumn and Vellvin were the treasure hunters. The went with the traditional explorer look. It was starting to rain by this stage and the hats were also effective in keeping the drizzle of the girls. 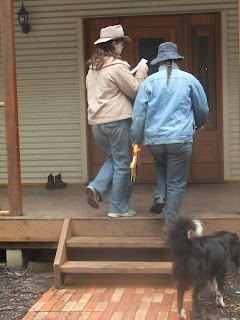 To your starting places girls and good luck on your quest. The girls were fairly quick getting to the end of the quest.

Stephen then checked where both groups got to after finishing and eyeballing the 'secret marker' in comparison to the established finish mark.
Both teams enjoyed the quest and were soon off to do other important last minute Sunday activities before a scheduled back to work week on Monday.

As to date Stephen has not revealed if both or either of the groups were successful in their quest. So how about it Dad?

Gae~ What a wonderful idea! God Bless your Stephen for "making it happen":) Too often when the words "I'm bored" are spoken around here, kids get put to work. LOL Thanks for the inspiration!

A Bit of the Blarney said...

This is fun!!! Hope you don't mind! I linked it to my Adventure Tour Express post today!!! Wow!! Cathy

Thank you Tiffany and Cathy,
It is one of the 'dad' things Stephen does really well
He will enjoy that you liked it so much!
I will try to pop over for the Adventure tour later today Cathy
Blessings
Gae