The last week has been one of very interesting a varied happenings.
We are enjoying having Anna-Lisa visit for a couple of weeks and that in our children's eyes ranks as a semi-holiday.
Today we made a mini McDonalds for lunch.
Why would we do such a thing? Well we actually like McDonalds although we rarely go there, but have been known on various occasions to drive through for ice-cream cones on the way home from town.
Well as we  haven't moved on from M Week and yesterday we were in Launceston and had McDonalds for lunch and Moran recognised the M sound and letter. I was inspired perhaps not to say 'Why don't we make a McDonalds tomorrow for lunch?" to her. I mean really what was I thinking....well I thought it could be fun. 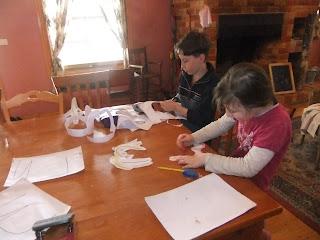 So today with children ravenously hungry wanting their lunch we started creating a home Macca's
First off we made these super cool, paper M shaped hats 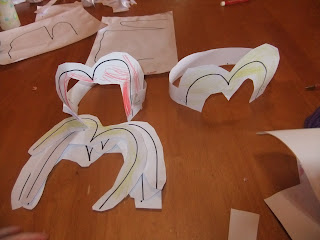 M's with paper stapled on for the bands and coloured in yellow and red. 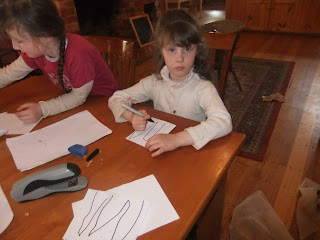 Myffwyn made the paper bags for the lunch meal. As we were out of brown paper bags (we use these a lot) I folded over paper and stapled together and Myffy drew her M on it.
She was going to colour in all the bags red, but I guess the fact that lunch was very late left her with limited energy. Only one was coloured in! 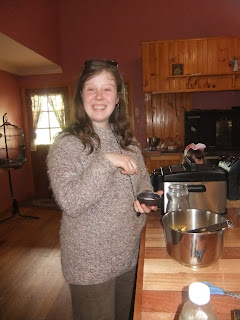 Our 'Macca's chef' making gourmet chips for all customers. 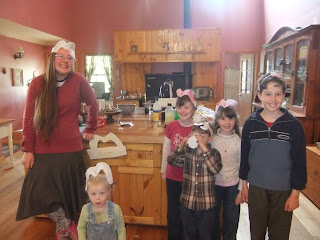 Did I mention you had to wear a hat to be allowed in the restaurant and to actually get some food?
No just for fun!
Notice the Sign blue tacked onto the bench, just in case anyone got lost on the way. 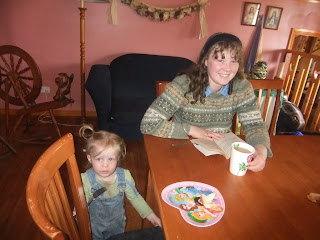 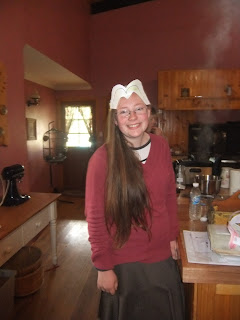 Anna-Lisa is a good sport and wore a hat too!
All in all the girls were very happy with the McDonald's shop 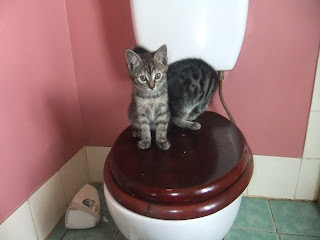 We also discovered our kittens trying to toilet train themselves. 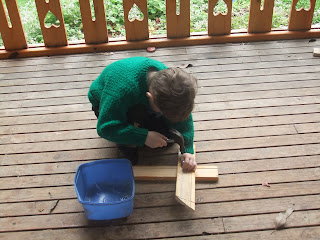 Corbyn has been nailing very happily wince I bought him some nails and he can keep out of Daddy's!
He is making an axe here, even though it looks like a sword. 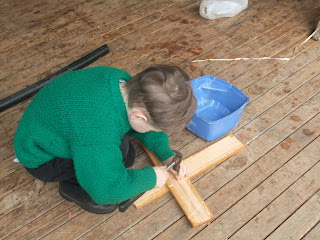 He really liked doing this and it does help him use up some concentrated energy, which is good for everyone. 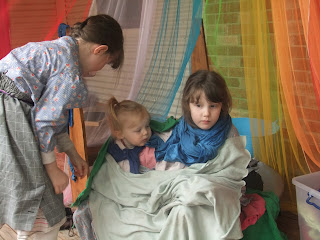 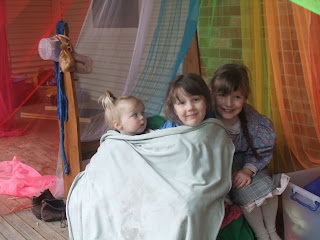 It was so funny that part of the game they were playing was "it is cold outside and we are getting warm!" 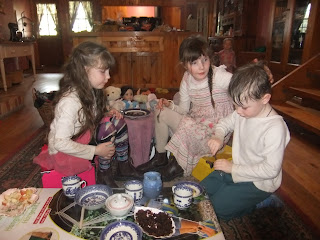 A spontaneous tea party using a box as a table and lots of sultan's and cut up apple to share with the dolls Of course Corbyn can smell the food and invited himself to the all girls tea party! 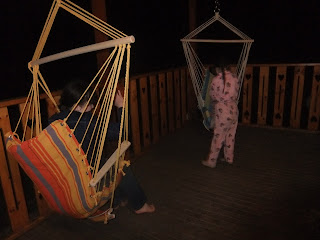 We got these swings last week to help with the Sensory issues for both Corbyn and Moran. They stayed in the garage for  a while until finally after lots of nagging, begging and pleading by Moran Stephen put them up one night after dinner. 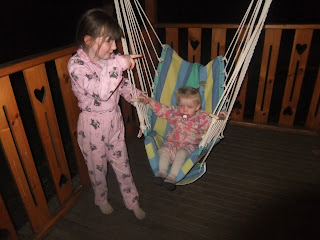 Moran was actually quite content to push Arwen in it for ages as Arwen loved it too.
Interestingly enough Moran has been a great 'buddy' to Arwen and is often helping her and taking her for walks etc. She is very dedicated and helpful in the ways she helps Arwen and I rejoice to see them together doing special sister activities. 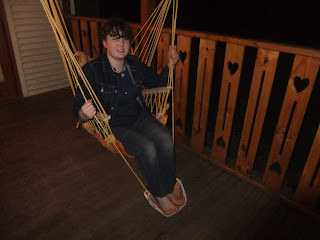 Of course a new swing requires everyone to have a turn and Vellvin was quite reluctant to let someone else have a turn.

We have had other life events happening with exams for our older boys and a trip to Launceston and the Genetics Lab people (perhaps another post on this one) but mostly we have been at home, constantly tidying up. I have no idea why this week has required so much of this, but such is life!

Oh yes, and having finally caught up on our washing from the older children being a way our washing machine broke down on Wednesday and we are waiting for a part to arrive.
So you know where I am going tomorrow don't you ....yes the laundromat with at least 9 large baskets of washing.

Cinnamon Buns - we double this recipe (at least)
Ingredients ~
580ml of water
2 eggs
4 Tbs of butter or oil (I use oil)
2 Tsp of salt
4 Tbs of sugar
7 cups of Bread flour
6 Tbs of milk powder
4Tsp Bread improver
5 Tsp yeast
Sultanas- I just add what ever amount I like.

Method ~
1. Put everything into a bowl and knead either by hand or mixer until ready.
2. Turn out onto lightly floured surface and roll to about 1cm thick.
3. Roll out to a 40cm x 40 cam square.
4. Melt 3 TBS of butter,
Brush over half the dough.
5. Combine 4 TBS of brown sugar and 1 1/2 TBS ground cinnamon and sprinkle over dough
(at this point I have also added chopped up apple as well)
6. Drizzle remaining melted butter over sugar mix. Roll up widthwise and cut into 2cm thick slices
7. Place on tray 5cm apart and cover with plastic. NB: The best way we have found so they don't stick to the plastic is to cover with a supermarket shopping bag.
8. Let rise until doubled in size.
9. Bake in a pre heated oven for18 degrees for 25- 30 mins or golden brown.
10. While warm add your favourite glaze.
We just use icing mixture milk and vanilla essence

The cinnamon buns look so yummy and I am hungry. Your family pictures always look like so much fun - they bring a smile to my face. Thanks for sharing. ~Alana~

Gae I just love when You share Your home life with us ☺
It is getting chilly here now , although no snow yet that is staying anyway. I am getting back into my routine of sewing , baking , cleaning .
I love all the wood within Your home it is so warming to the soul .Reminds me of a cottage ☺

Wow, I am tired just from reading all you have been doing.Do the swings work, I have thought about these for my oldest Son.Love the pictures.Blessings ,Marla Grace

Cinnamon rolls! I absolutely love them. I am tempted to make them now. :)