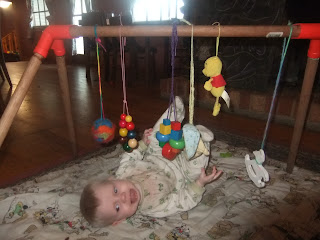 As Trahaearn is growing and becoming more settled he is spending more time playing on the floor by himself. Well for as as long as he can see people nearby.
When our Kynan was a baby my Nana from England sent some money for her first great grandchild. We decided to buy a Sesame Street Play-gym (very old fashioned compared to the new ones).
Frankly it was not much use as a play area as the toys suspended form it were relatively boring and static not to mention basically the same 'platicy' type, but there was very little in the way of natural /wooden toys back then. However over time it eventually broke and we added other things to it. 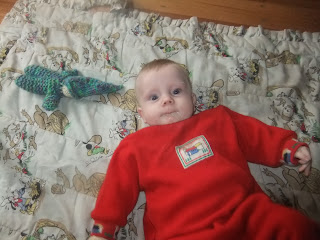 The whole structure fell apart when Corbyn was a baby. You would think it would last longer than 10 babies now wouldn't you, lol.
For Arwen we re-made the support structure out of wooden broom handles and used the plastic corner pieces form the old plastic one. I would have loved to use a timber corner but couldn't work out one myself (Stephen was still away at the time) and these were perfectly adequate anyway. Not perfection but workable.
The advantage of this is we are easily able to  pull the support structure a part to pack away and the toys are simply tied on with wool or string etc. 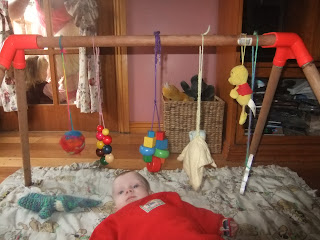 WE made some home made toys for Arwen to enjoy and she played with these quite happily for a while as well.
So once again we added a few home made and other toys. The little ones Corbyn  and Arwen especially keep adding ones they think Trahaearn would have. Sometime it is a bit over whelming for him the amount of items to look and try and reach.

Perhaps you can see a felted ball, various wooden beads, a small gnome type doll and a wooden cutout of a rocking horse. Oh of course you could not miss Pooh Bear, now how did he get on there?

So once again I am enjoying the fact that we have managed to make something to our specifications rather than being told what we must like as consumers and therefore be subject to whatever is thrown at us by retailers.

Gae, This reminds me of the one we had for our children. We were constantly rearranging the hanging items, to create lots of visuals. And our broke too- we fixed it up very similar to you. I think I still have it somewhere..Leanne