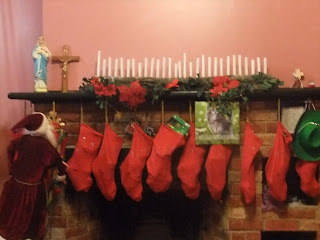 'The children were in bed all sound asleep when we saw we were having a visit from St Nick.'

Each year the children anticipate this feast as a precursor to Christmas and it is with much joy and anticipation that I enjoy preparing the gifts to put in the St Nicholas stockings. These are fairly inexpensive gifts totally about $7-$10 each. The cheap shops carry some little things and I look for bargains all over as well. 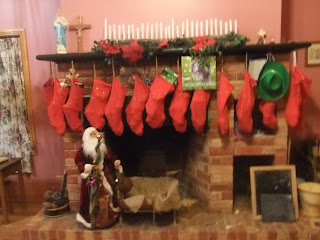 Traditionally we have an orange a bag of gold chocolate coins, homemade speculaa cookies, and a peppermint candy cane as standard inclusions before anything else. 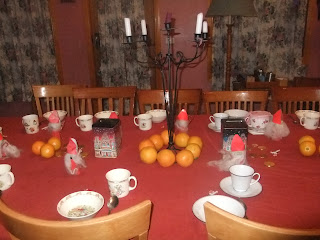 I still decorate the breakfast table and add a few extra coins and St Nicholas decorations. 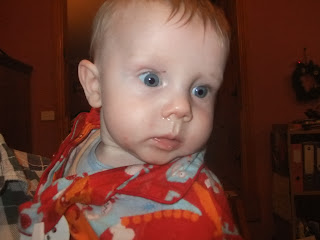 Somebody, not naming anyone but see those big eyes was up way past his bedtime helping slowing down the arrival of St Nicholas. 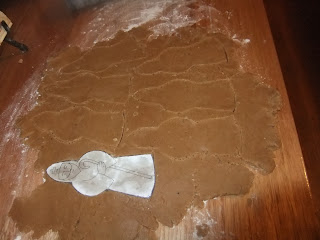 The other reason was I was still making these speculaa cookies. I cut htem out around the pattern we have, rather than a cookie cutter 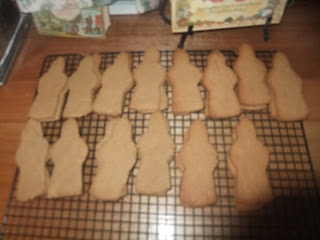 . Even though I started them early in the morning I had errands to run and did not acutalyy start rolling our dough until after 10pm. We each have two in our bags and that equals one quantity of dough. 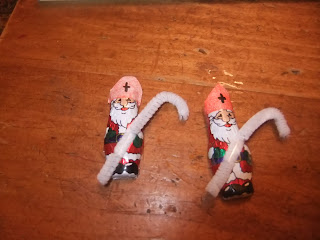 I also made these St Nicholas chocolates, as mentioned in a previous post. 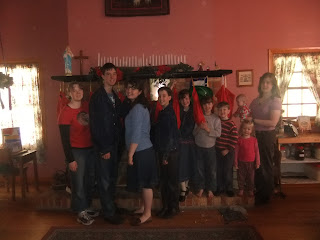 Come morning, too early, for me after a very late night Corbyn was trying to get everyone up ready to look in the stockings. We always open these together and no one is allowed down to have a 'touchy feely' of the bags. So little Corbyn was sitting at the top of the stairs, head in hands  waiting for everyone to come. 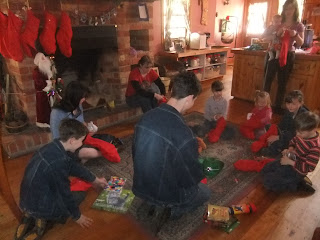 Most of the children opening their gifts. Of course it was Trahaearn's firts St Nicholas day and the older ones were very keen to see him enjoy his gifts. 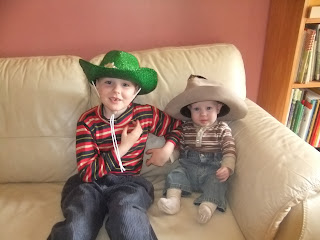 Two little cowboys. Corbyn got this cool green cowboy hat for St Nicholas day. Green being his favourite colour like Theodore from  Alvin and the Chipmunks and well he loves cowboy hats, this being his third over the last 2 years. 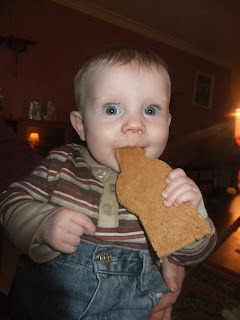 Guess who go his first taste of a cookie? Well his first solids EVER actually after getting his FIRST tooth on the Eve of St Nicholas. 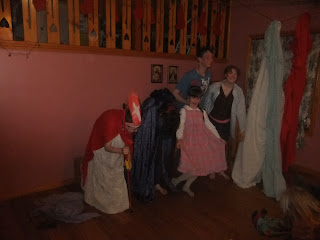 WE were treated to a very elaborate play that took over 5 hours of preparations and dress rehearsed (look for this to come) and it was a very real presentation of the Life of St Nicholas. 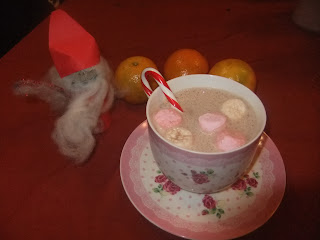 After the play we had our St Nicholas Hot Chocolate with marshmallows and a peppermint stick.

This was my special gift the beautiful tea cup. It is extra large so can fit a mug size of coffee within, something I have always wanted and so very pretty as well.

At the end of a very happy day we were thankful for the blessings we had received not only on this day but for every day.

What a beautiful celebration you all had. I love the way you set your table - just beautiful! And those big baby blue eyes....What a gift!

Happy Feast of The Immaculate Conception!

It looks like so much fun and the hot chocolate looks yummy :)

What a great idea cutting around a template. Looking forward to seeing the play.

sounds like you had a pretty good day , The hot chocolate looks good , and the picture the baby eating the cookie is really cute ^.^

I love the baby cuteness! That hot chocolate in a beautiful teacup looks good right about now...rather than heading in to do dishes! I hope you are doing well, it has been a long time since I have commented. Your family inspires me, you do such special things together. :-)

What a beautiful family celebration of St Nicolas' feast day!
Gae, your mantle looks like a lovely Christmas card with all the red stockings hanging on it :-)
And Trahaearn looks like he enjoyed his first taste of a cookie!
Your teacup and saucer is very pretty too - just right for a lovely lady like you!
blessings..Trish