May Day: A look into the Past through Lark Rise to Candleford 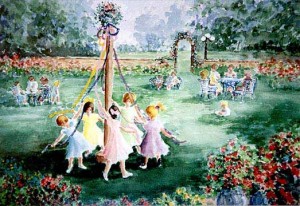 After being introduced to the much loved, by me anyway Lark Rise to Candleford TV Series I really had to buy the book. As I could not wait for the book to be sent via mail from the UK and the price was reasonable I just had to buy it on my Kindle.

At the start I was disappointed as it was nothing like the TV series and had only slight references to some of the episodes on DVD.
However I soon came to enjoy it for the simple explanation of a time gone by, a hard time and yet a time where  the beauty of everyday was enjoyed and the companionship and virtue of family and community was a meaningful part of daily life.

As I have always loved May Day and remember as a girl practicing dances in our 'primary school' years I have loved celebrating in our own way this day in our home with my family. (here are all the post on May Day and the way we celebrate in our home, including this post too)

I was so intrieged as I read further through the book to read a very detailed description of May Day and how it was celebrated in this part of England at that time in history.

So while I continue to make things tonight  for our celebration tomorrow, which I will post  here too when I am finished. I hope you will take the time to read this part of the chapter  from the book Lark Rise to Candleford and enjoy a little stroll through history~

Lark Rise to Candleford, by Flora Thompson - Chapter 13
May Day

After the excitement of the concert came the long winter months, when snowstorms left patches on the ploughed fields, like scrapings of sauce on left-over pieces of Christmas pudding, until the rains came and washed them away and the children, carrying old umbrellas to school, had them turned inside out by the wind, and cottage chimneys smoked and washing had to be dried indoors. But at last came spring and spring brought May Day, the greatest day in the year from the children’s point of view.

Gae,
We loved Lark Rise to Candleford. The book excellent.
Such a great series.
Have you looked at Paradise..about a department store in a town and the adventures that happen there ??

Love that book too! We usually celebrate May Day with baskets of flowers brought to the nursing home. The elderly love it so:-)