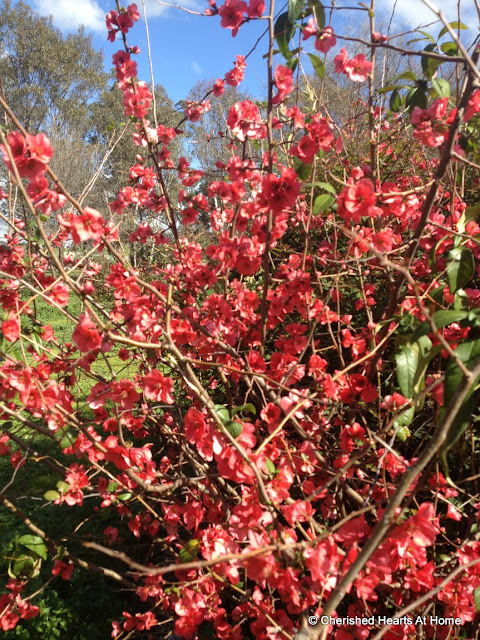 It started out with my husband saying 'How about you bring your craft outside today and be with me while I do some things ?'
I often get very busy inside and don't really spend as much time outside as I like.
Seriously I love being outside watching my little ones play, having some older ones drop by and have a little chat as they go about their own business and yes I enjoy watching my honey work on the things that make him happy.
But I often get caught up in the things that 'need' doing and as such miss some of these most precious times of memory building. 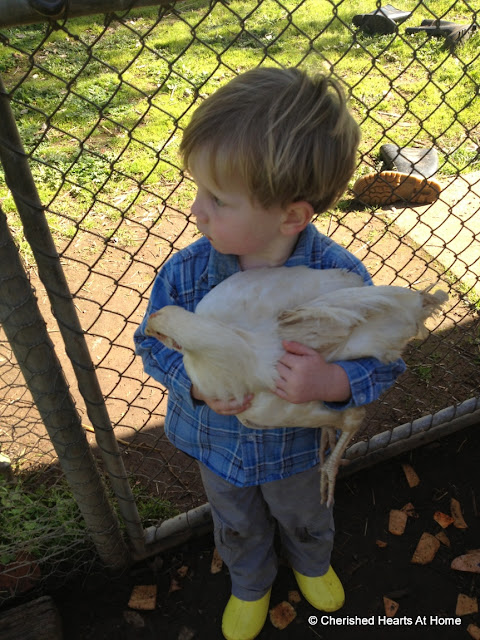 So this day, last Sunday I gathered up my basket and set myself up under the trees in the so very pleasant Winter sun and prepared my self for an hour or two of fresh air and sunshine.
Surprisingly I spent most of the day out there really until we had to get some of us ready to go to Church in the evening. 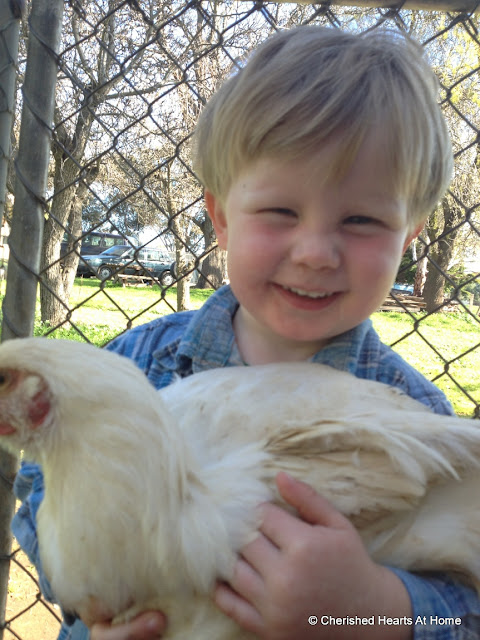 Here are some of the memories that were captured on this precious day-
Trahaearn is growing even more confident with the chickens,  not that he was ever really scared of them.
However he really loves this chicken, Gertruda, and often runs in a scoops her up for a cuddle. 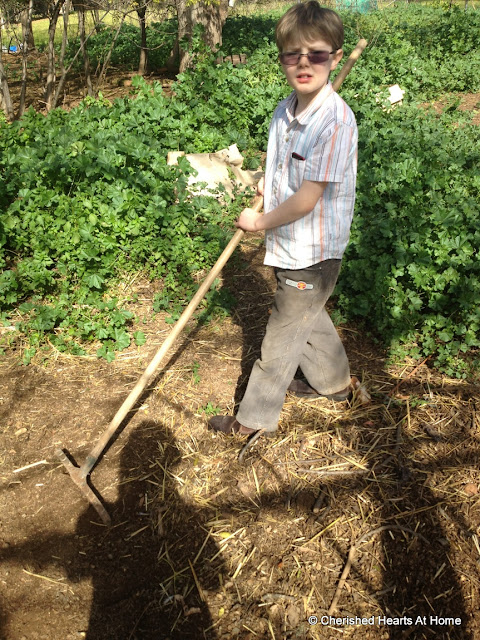 The children love to play in the huge chicken run as it has great climbing trees and so they often play in there with the chickens, and the lambs when we put them in as well. 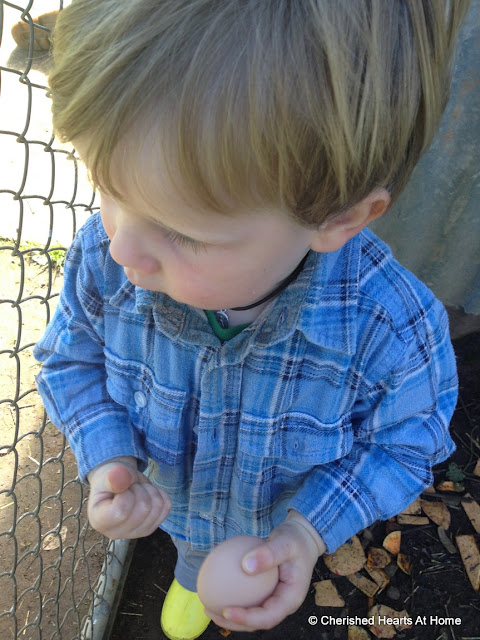 All the children love collecting the eggs and Trahaearn is so careful with them and always brings them to show me. 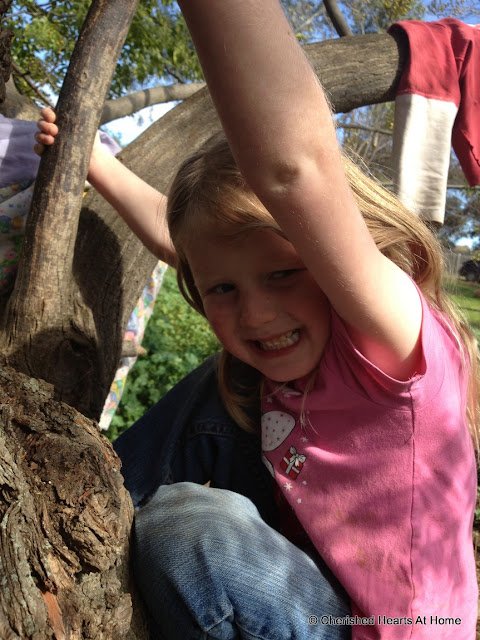 See climbing on the trees, not not a monkey it is a little princess 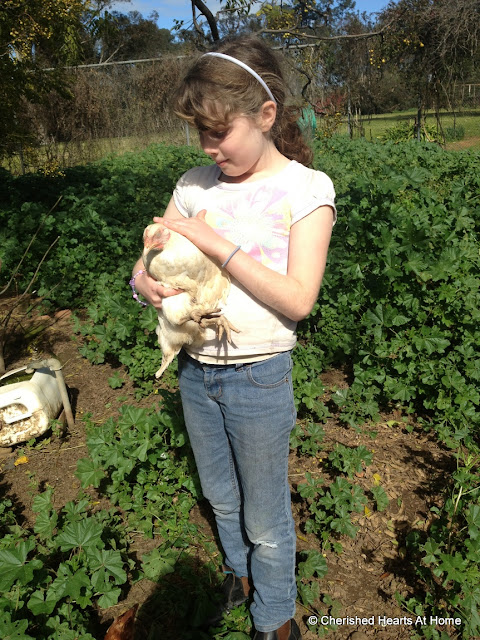 Gertruda really seems to be a placid little hen 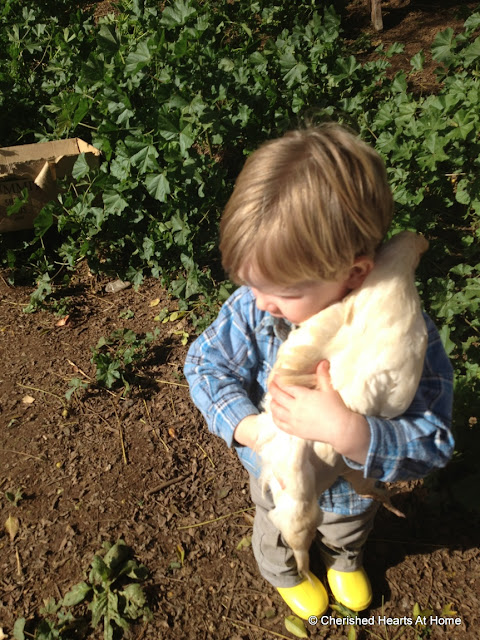 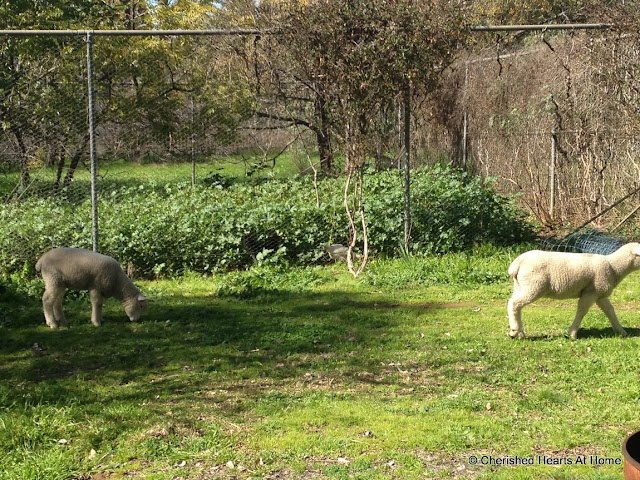 The lambs were running around outside their pen because they had eaten all the grass in their area so............. 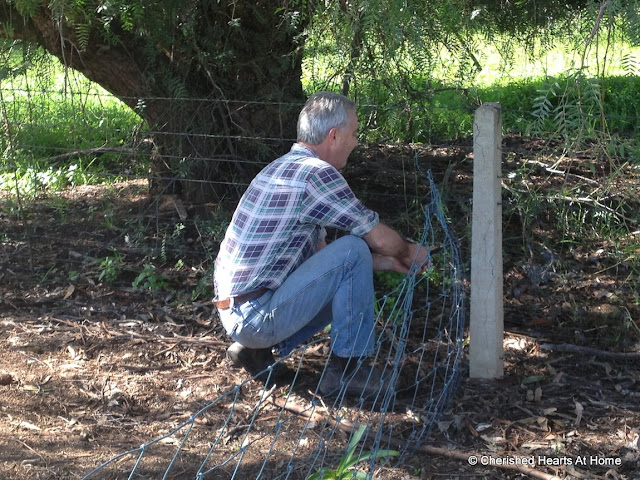 Stephen started taking down the fence to move to a new location. 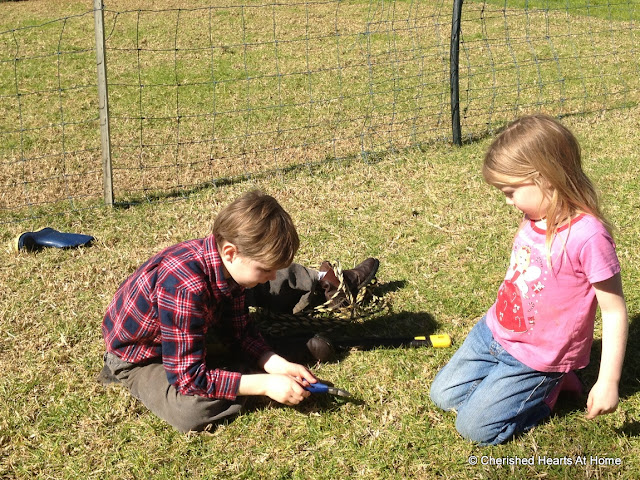 He had a few helpers but some lost interest at this stage and started cutting the grass with wire cutters. 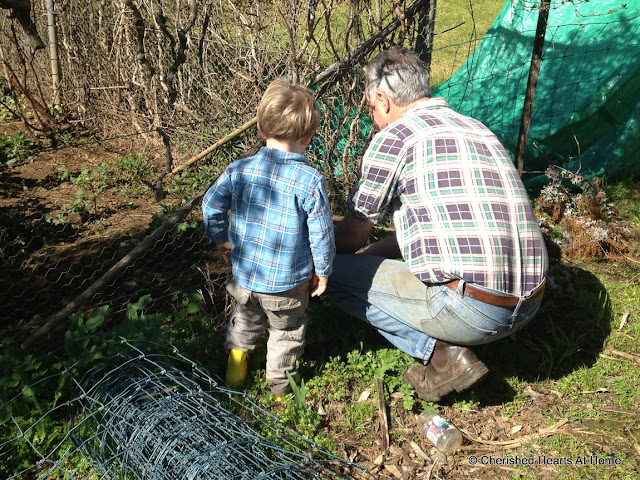 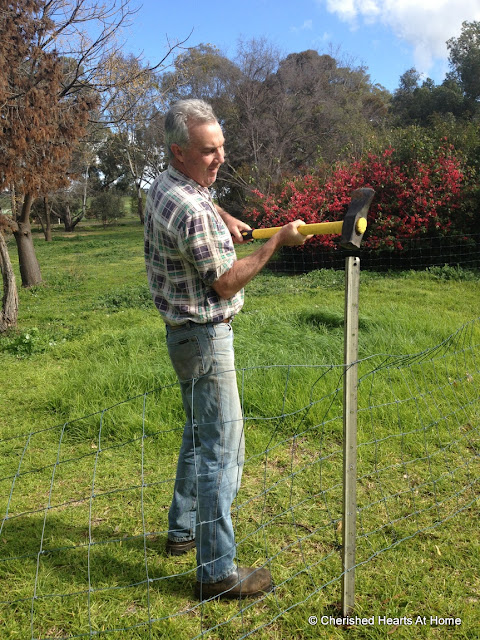 We finally had a new spot ready and then it was putting the posts back in. I became the holder of the star-pickets for a while.
We are trying to decide if an electric fence would be a better option. You know the time v's money factor. 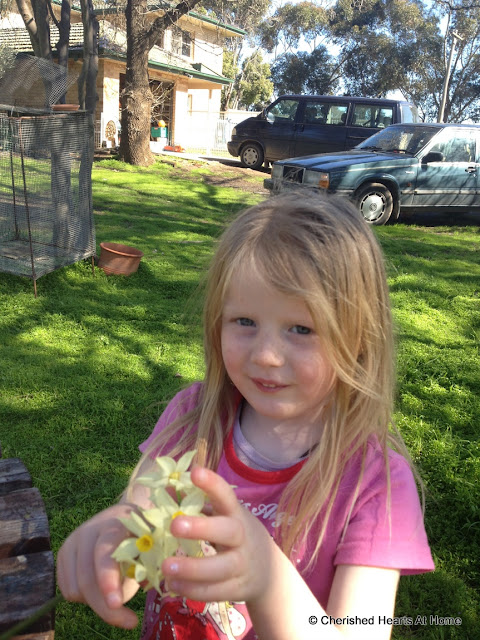 As I sat doing my cross stitch I had many little visits from small people. This particular time Arwen brought me fresh picked flowers 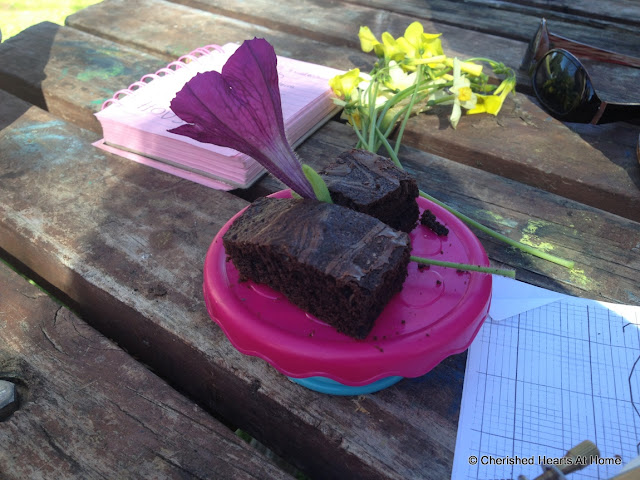 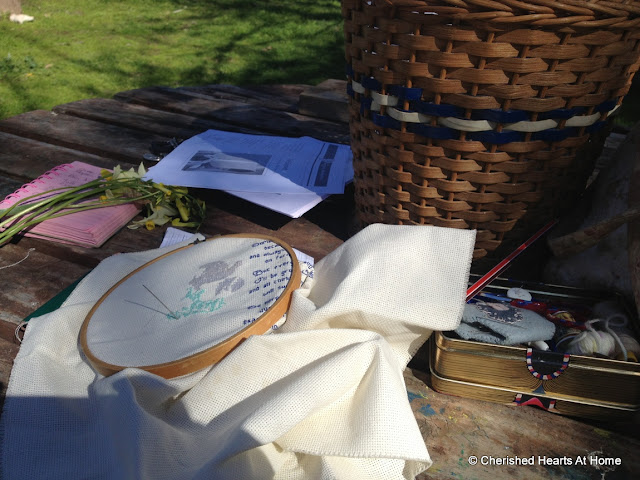 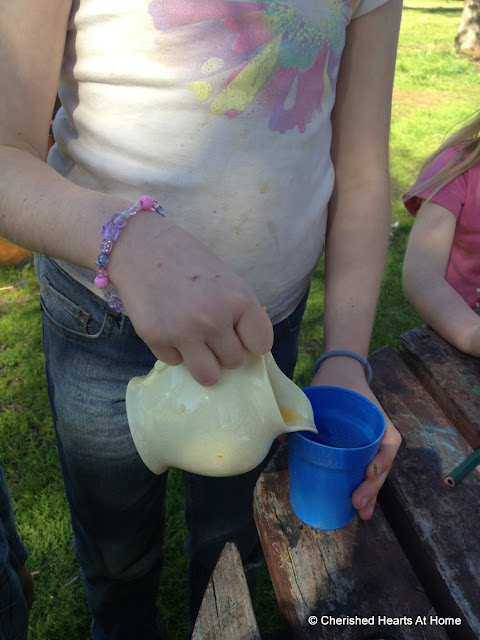 Then we were brought some freshly squeezed orange juice.
Myffy loves squeezing oranges and I have to limit her amount is we are to have any left to eat. 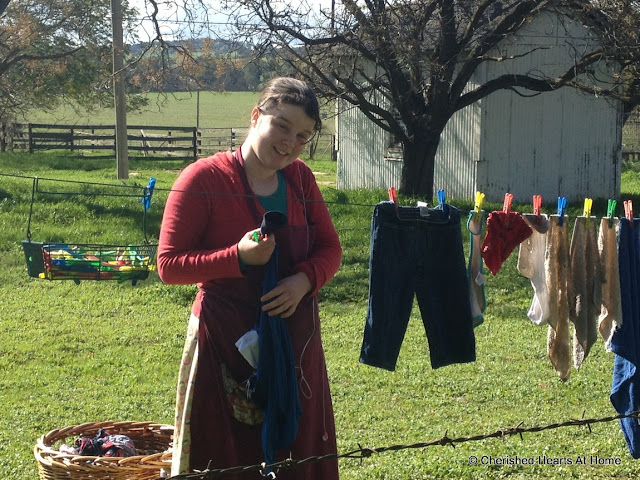 Of course there are still the chores to be done and so the washing was hung out and brought in. This is a never ending chore, but it  is so lovely to hang it out in the sun while chatting together, or listening to favourite audio books if by ones self. 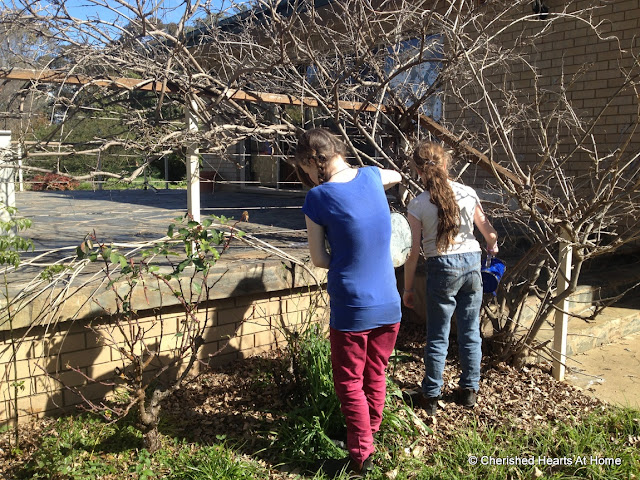 Moran and Myffwyn decided to water all the plants, even though we have had a lovely lot of rain. There is something about watering with a watering can I think that is very relaxing. 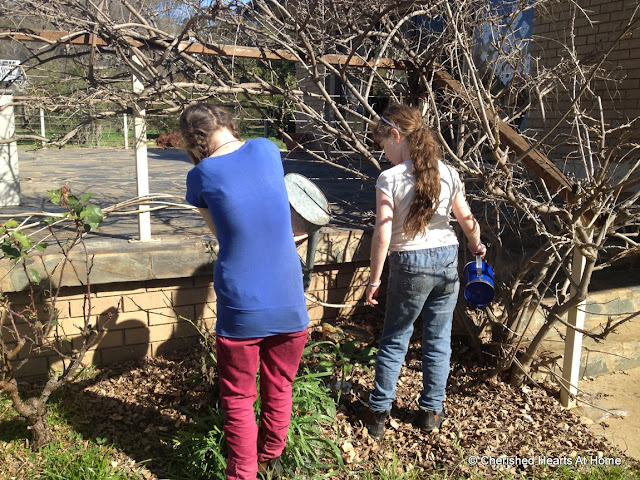 It is a pity they were not really keen to weed the flower beds instead. Oh well!! 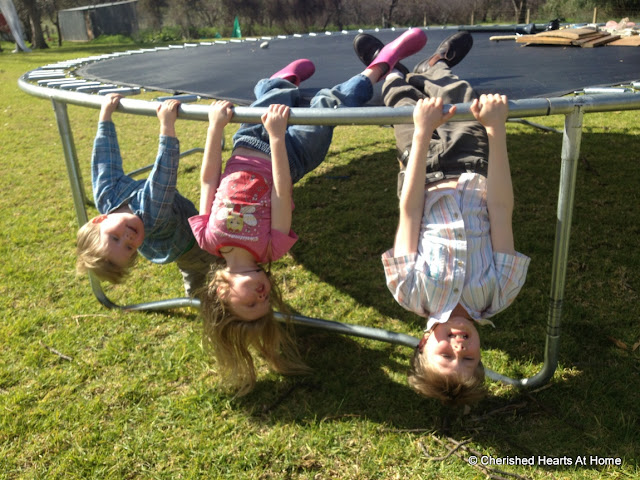 When we moved the lambs we also moved the trampoline and this must have excited the younger ones to play on it again. So we had the three little monkeys hard at work for a while....... 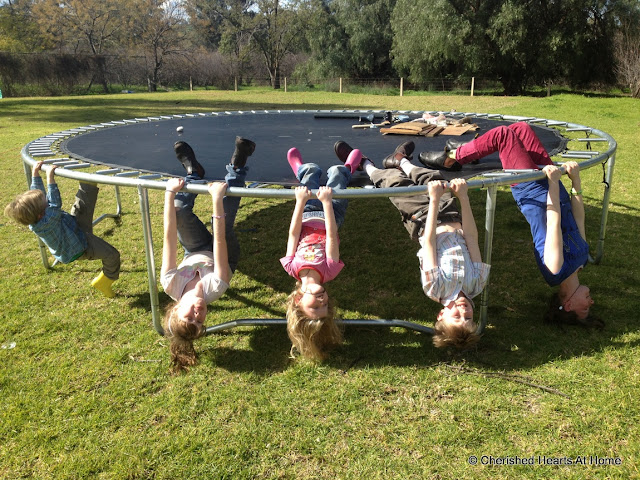 until they were joined by two more. 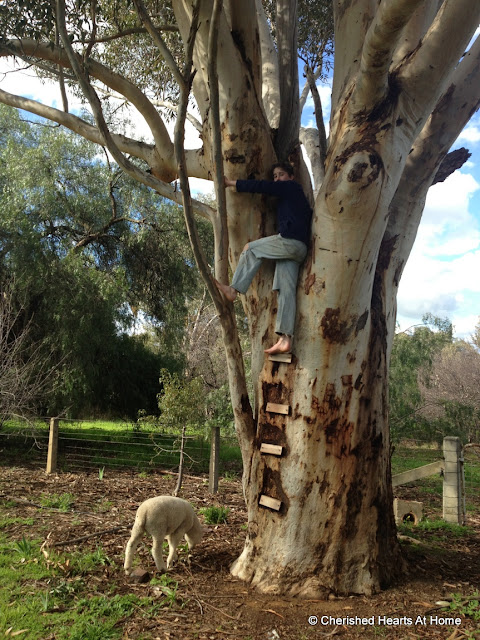 On a beautiful Sunday afternoon this tree just begs to be climbed doesn't it? 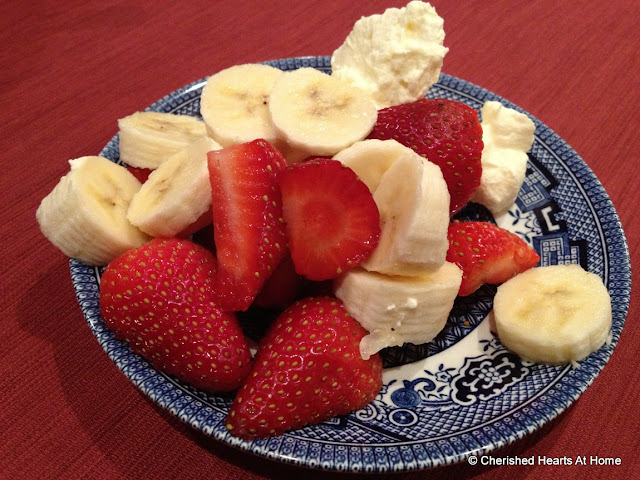 And to finish the day off we had beautiful strawberries, banana and fresh whipped cream.

This was one of the most enjoyable and yet relaxing days we have had in a long time, and it started so simply too with a humble and yet loving request.

Sounds like a lovely day. How do you say Myffyn's name?

What an amazing day. Days like those are such a blessing. Sometimes the most simple things bring about so much joy your heart overflows with it.