The Monday and Tuesday before Ash Wednesday are known as "Shrovetide," from an old English word "shrive," meaning "to confess," a name gotten from the tradition of going to Confession in the days before Lent started. Shrovetide is traditionally the time for "spring cleaning," and just as we clean our houses in these days in preparation for Lent, we also "clean our souls" through confession so we can enter the penitential season fresh.

Shrovetide is the last two days of "Carnival," an unofficial period that began after the Epiphany and which takes its name from the Latin carnelevare, referring to the "taking away of flesh" (meat) during Lent which begins on Ash Wednesday, the day following Shrove Tuesday. Catholics want to eat while they can and get the frivolity out of their systems in preparation for the somber Lenten spirit to come.

The Tuesday of Shrovetide is a particularly big party day known as "Mardi Gras" (French for "Fat Tuesday") -- or "Pancake Tuesday" because fats, eggs, and butter in the house had to be used up before Lent began, and making pancakes or waffles was a good way to do it. In many places, especially in England, pancake races became popular and remain popular today. In these races, women must run while flipping a pancake so many times, and whoever crosses the finish line first wins. The largest pancake race in England is in Olney, in Buckinghamshire. There, the women must wear a dress, apron, and bonnet, and flip the pancake three times -- while ensuring it is intact after they cross the finish line, of course. The story told to explain the origins of this race is that in 1445, a homemaker heard the shriving bell (the bell rung to summon people to Making Waffles, by Joachim De Beuckelaer, 1550-1560 (detail)confession on this day) as she was busy working in her kitchen. Not wanting to be late, she rushed about and ran off with her skillet still in hand. from Fisheaters

IN OUR HOME
We celebrated Shrove Tuesday with some final preparations for Lent. I was really very keen to make these little Madi Gras Masks (in the first image)
I know lots of people make King Cakes and they look wonderful, but I wanted to try something different.
I had made Eden this cake as a large one for her birthday last year and I was flicking through my Cup Cake book for birthday cake ideas and then remembered these. 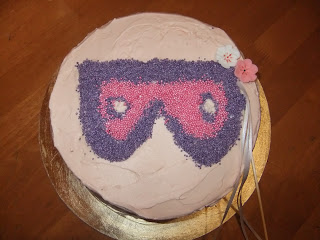 I only made one for each of us as I was tired at the end of the day and they were a little fiddly to do, so we have a heap left over to eat another day.

Place icing on the top of a cupcake or other full size cake and then I used those silver balls (can't remember the name) that are for eating. Simply shape them into a mask shape and then I added a cut off straw and a sugar flower for the decoration. Add ribbon if you have it, I didn't yesterday.
Voila..finished Madi Gras Mask cake. 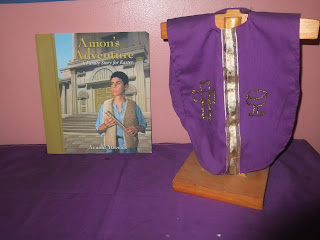 We have been waiting to read Amon's Adventures since we pre ordered it months ago. We will be reading a chapter every second  day. Our Father Pine is in his Lenten vestments in preparation too. 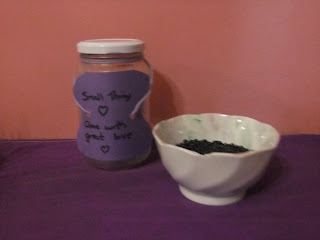 This year in addition to our Crown of Thorns we will be  placing  an empty jar next to a bowl of black beads. For every sacrifice, prayer, act of kindness or penance performed, a bean goes into the jar.

On Easter morning, the beans will be replaced with M and M's, reminding us that the rewards of Heaven will be sweet! 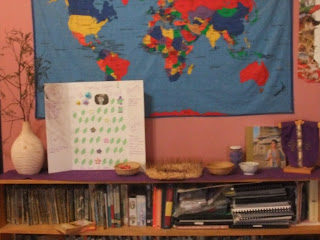 Our Lenten Quest Calender along with the Crown of Thorns, Sacrifice beads and Amon's Adventure book ready. The tree on the left is our Valentine Tree that we will be using as  the Jesus Tree based off Jessica's.
I will be adding the felt images each day (after making them) as I haven't been organised to do this ahead of time. 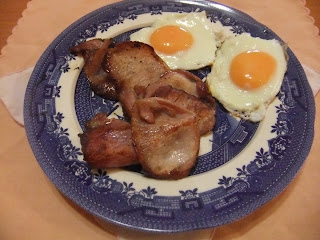 Our traditional meal for Shrove Tuesday is bacon and Eggs..... 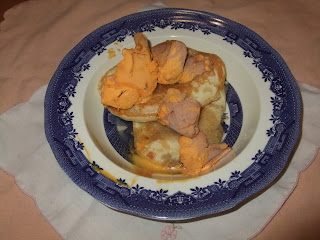 and pancakes with maple syrup and ice cream.

This may not be very traditional for some people but these are not average foods in our home and so definitely come under the 'Fat Tuesday' banner. Of course we ate the cupcakes above as well and certainly were much 'fatter' than we were before.

It was coooooo nice Mum!
<3
Autumn

Loving your jar idea! I still can't get use to the idea, though, as pancakes as a desert. In America we eat them for breakfast!! The first time I served them here for breakfast my mother-in-law thought it was a special treat. ;)

How fun! A co-worker brought back a King cake from New Orleans so we were able to enjoy some last week! Your cake looks great!