Our St Nicholas Play 2011 by Saxon 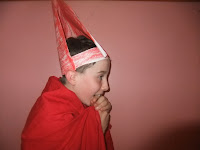 Greeting everyone and welcome to a guest post from Saxon on our Saint Nicholas play.

We (Me, Eden,Vellvin, Rogan, and Moran) being the awesome people we are didn't start planing the play till noon ON the day. So we had a mere six hours to cast, design the set, actually get a curtain up, rehearse and have costumes ready.

Its amazing how much spare energy you find you have when you need it.
I was unofficially the Director and all of us were the actors.
We all decided Rogan was an awesome Saint Nick and Vellvin was dying to play Constantine,  Rogan and Vellvin were cast as Saint Nicholas and Constantine respectively.
Mum was the narrator and was given the title only minutes before the main event. 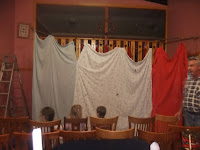 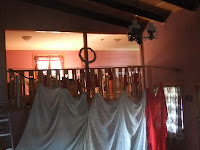 Preparing the stage was a mammoth task with erection of this stage curtain. This was a feat of some note and engineering as Dad has a strict policy of not putting holes in the wall for 'extras' 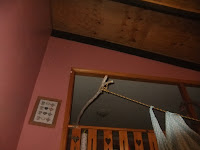 Whilst overseeing the set design and costumes I managed to write the start of the narrative that was to take place between scenes, and I finished the rest 15 minutes before the curtain was pulled back. Quickly I found an awesome narrator, tossed the papers in her arms and continued with the final preparations.


Many years ago, in a land far away in a country which is now know as Turkey.

There was a boy: Nicholas
A saintly boy he prayed for many hours each day. Though small he was very mature, always giving to the poor and hungry.
But alas Nicholas soon lost his parents to the plague inheriting large wealth from his parents; he made it his life’s mission to give to the poor and to glorify God.
In Patara where Nicholas lived he heard of a man who had lost his fortune and was near to being broke. The man had three young daughters whom he had to supply dowries for.
But sadly, he could no due to his lack of cash; the future for the small family looked very bleak indeed. Upon hearing this, Nicholas was determined to help; though not the usual way......
A few years later in a parish whose bishop had recently died a priest heard the voice of God in his sleep
saying “Awaken soon my son, and be at the doorway, ask the first person who enters their name, if he answers to the name of Nicholas make him the new bishop.”


After being made bishop,

Nicholas’s fame grew even more, he was easily recognized by his white and red garments and also by the dark-skinned man who was his constant follower and companion known as Black Peter.
But alas, not all were pro for Nicholas and Christianity and it was not long until an Emperor by the name of summoned him to speak with him……
Stoping in mid sentence, the emperor was awestruck when he saw a vision of Jesus and Our Lady in the sky. Instantly he had a change of heart and then continued to Nicholas:

Bishop Nicholas’s fame grew more then ever and some considered him a living saint. One day when a group of sailors were caught in a storm they called to the famous bishop for to help them though he was not present among them; they were answered.

One night the same Emperor Constantine, after arresting and imprisoning three men accused of a crime had Nicholas appear in his sleep saying:
“Release those 3 men whom you imprisoned for they have been wrongly accused and are innocent”
Many years later, after performing many more miracles and when he was around 60, Nicholas went home to Heaven, But not before telling his faithful follower Peter one…last…thing.
THE END

Thank you for your company!

PS. from Mum. I usually take the photos for these little plays and make slide (which seems to be shutting down, so I need new format to continue this- any suggestions?) shows but for what ever reason the camera was not taking clear pictures. Also the director was not used to directing against a wall in the background and forgot to allow for the 'audience point of view.
However I am thrilled with their work and the creativity they put into this play and look forward  to the now monthly plays they have promised us.

I always enjoy the pictures you share. Such a wonderful family! It's neat to see the imaginative play your children share with one another. I bet it makes your heart sing. Happy Advent season, and Blessings! ~Deanna